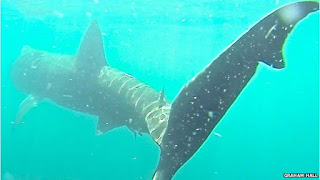 Isle of Man researchers have deployed their first basking shark tags of the season, as part of continuing efforts towards international conservation.
Marine scientists have tagged four fish since May to help create a series of profiles called shark passports.
The information includes images of the shark’s dorsal fin to help with identification.
The tags are designed to reveal where the sharks travel to during the winter and to what depths they can swim.
A spokesman from the Manx Basking Shark Watch said some of the tags are designed to attach to the shark’s dorsal fin and some to be towed.
It is hoped the technology, which means the sharks can be followed in real time, will stay attached for up to a year.
All the sharks tagged by the Manx Basking Shark Watch can be followed online.
Thanks BBC