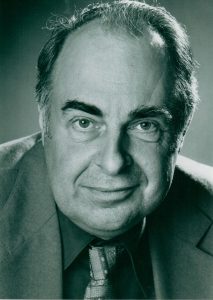 The late Nigel Kneale is considered to be the Island’s most successful radio, television and film scriptwriter, subsequently immortalised by his creation of the cult BBC TV science fiction series Quatermass during the 1950s. But a rarely heard play entitled The Road, recently aired on BBC Radio 4, revealed another side of his work.

He was born in Dalton in Furness in 1922, but the Kneale family returned to the Isle of Man six years later, when his father, a journalist, joined his brother to run the Mona’s Herald.

Upon leaving Douglas High School for Boys he initially studied law, but soon realised that his talents lay elsewhere, writing several short stories reflecting upon Island rural life and published in 1949 under the title Tomato Cain and Other Stories. He ultimately left the Isle of Man to study acting at RADA. and was presented with the Somerset Maugham Award, but then concentrated on writing for the burgeoning television industry.

Voted Manxman of the Year in 1957, Nigel Kneale soon formed an impressive reputation as an innovative screenplay writer, although he did decline the early James Bond films.

Adapted by Toby Hadoke, who kept as close as possible to the original script, he described The Road, last seen on television more than fifty years ago, as a lost classic. It centres upon the ghostly activity of a country wood in 1768, but playing against the backdrop of this story is the dichotomy between the scientist and the philosopher who jockey for position throughout this narrative of the supernatural; which ultimately becomes a tale of futuristic horror. The main players in this formidable production (played by Mark Gatiss and Adrian Scarborough) remain at odds with each others’ beliefs throughout the story, but there’s a terrifying realisation for one of them in the closing moments of the play.

Unfortunately the original televised broadcast was systematically wiped, along with countless other programmes at the BBC during the 1960s/1970s, but the script, described as ‘one of the greatest missing masterpieces’, survived. A 1964 Australian TV version was also lost.

Recorded at Maida Vale Studios in London and Salford’s Media City, Hadoke’s contemporary version benefited from some of the original radiophonic sound effects and the talent of actor Hattie Morahan, whose late father, Christopher, directed the original adaptation. The recording was also attended by Nigel Kneale’s widow, Judith Kerr. A successful writer herself (Mog, The Tiger Who Came To Tea), she spoke fondly about her late husband and his work.

A study of Nigel Kneale’s productions reveal a tendency for prophecy, but look closely and you’ll also find a trail of subtle Manx references. One of the main characters in The Road, Squire Hassall, may well be named after the man who lies in Malew churchyard, better known these days under the sobriquet of the Vampire Grave. Additionally, in the story, unseen people walk upon cobbles beneath the road on Michaelmas Eve and strange cries rent the air – a parallel, perhaps, with the ‘little people’ travelling to and from an ancient barrow (burial mound) to Maughold churchyard using underground passageways, and the sound of angry voices at a hill fort in Castletown.

He also introduced Manx topics into his radio drama The Long Stairs (based on the Snaefell mining disaster) and his only stage play Crow, centring on the life of the Manx slave trader Captain Hugh Crow of Maughold, which regrettably never went into production.