The Shuttle launch has been moved to Thursday. 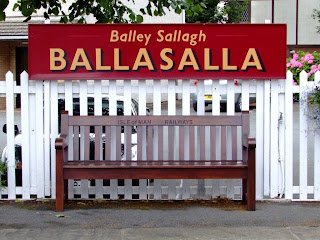 Signage is now a daily part of our lives, commanding our movements and providing useful information. It’s also an ongoing challenge to the Manx Language Officer, Adrian Cain, in his quest to see more of the Island’s native language visible to the general public.

He commented, “Signage is important from a minority language point of view as it lends credibility and visibility to languages, which are often quite hidden”.

Recently though the promotion of the language has suffered one or two setbacks with the downplaying of Manx Gaelic on the Island’s buses, downgraded after a number of complaints from customers, although it still remains a feature of the new timetable. ‘Bus Vannin’ operates under the wing of the recently formed Department of Culture and Community.

Adrian’s disappointment was compounded by the recent re-branding exercise undertaken by ‘Isle of Man Creameries’ when the Manx language was unexpectedly dropped from their milk cartons.

Despite this minor fluctuation all is not lost with the recent introduction of some new ‘No Smoking’ (Jaaghey Meelowit) signs in Manx Gaelic positioned at the entrance to the Strand Shopping Centre. Adopted as part of an on-going project to promote a Manx identity for the shopping centre, Adrian remarked, “It’s always good to see the language being used in innovative and exciting ways. Not only does it get people thinking, but it also demonstrates that the language can be used in a wide variety of contexts”.  However, Adrian may still have some work to do as a number of shoppers thought that ‘Jaaghey Meelowit’ was actually Polish!