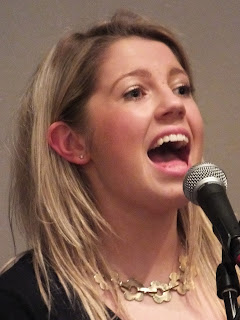 Local singer, Michelle Jamieson, will represent the Isle of Man at the Llangollen International Musical Eisteddfod later this week, which attracts competitors from an international field as well as those much closer to home.

Instigated by the people of Llangollen and Wrexham, the first event was held in 1947, and despite some worries it was an unmitigated success.
Placido Domingo’s first professional performance in the UK in 1965 was at the Llangollen International Musical Eisteddfod, and in 1955 Luciano Pavarotti competed with his father and others from their home town of Modena, in the male voice choir competition.
Seventeen year old Michelle from Port St Mary, has already made a name for herself on the Isle of Man as a songstress, but also performs with the Douglas Choral Union, Taylorian Productions, the Manx Operatic Society and the National Youth Theatre.
Michelle, a student at Castle Rushen High School, will perform unaccompanied in the folk class with the powerful Manx song Fin as Oshin (Fin and Oshin) followed by Yllagh Ushlagh (Watery Cry) accompanied by Laura Rowles who also worked on the arrangement.
But in the musical theatre class Michelle will perform Your Daddy’s Son from Ragtime and Whatever Happened to My Part from Spamalot.
The final round of the competitions will take place at the Royal International Pavilion and will be filmed by the Welsh TV channel S4C, where Michelle will present Gimme Gimme from Thoroughly Modern Millie, if she’s successful in the preliminary rounds.
She will also be performing as part of the quartet Shen Scoill, who won the Best New Song at the Pan-Celtic Festival in County Derry in Ireland during 2014.
Sponsorship for Michelle’s visit to Llangollen Eisteddfod has been provided by Culture Vannin.