Kelly McCarthy Posted on May 29, 2012 Posted in Uncategorized 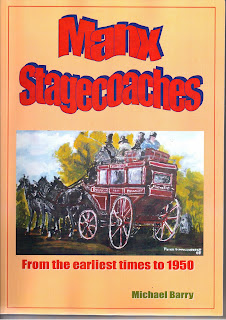 Written by Manxman Michael Barry, this detailed publication looks at the evolution of public transport on the Isle of Man from earliest times up to 1950, charting major advancements by a selection of enterprising individuals, although it wasn’t until the late 1920s that the first all-Island motor bus service was launched.
Michael, who worked with the Island’s buses for over 25 years, is fascinated by transport history and has undertaken extensive research on the subject. Believing there to be a gap in the annals of Manx history the author skilfully introduces the reader into the world of the early stagecoaches; following their progression into motorisation and reflecting on the introduction and demise of several companies.
Illustrated with a generous selection of photographs, the reader can sit back and journey through the ups and downs of the coaching trade which reached its peak in the 1860s, but was soon threatened by the railway and the internal combustion engine.
Also included is a useful and important explanation about the value of money pre-decimalisation and a selection of Appendices for the dedicated enthusiast.
Sporting an eye-catching painting of the Dixon’s stagecoach ‘Majestic’ from the 1820s by Peter Mylchreest on the front cover, this book is a nostalgic trip down memory lane, revealing how the people of the Isle of Man were presented with the ability to travel as never before.
‘Manx Stagecoaches’ is available throughout the Island priced at £15.99.
Valerie Caine
© May 2012, (Courtesy of Manx Tails)