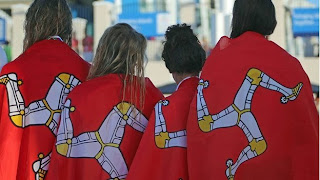 The Isle of Man team’s success at the Island Games in Bermuda will “inspire the next generation of Manx sports stars”, the chief minister has said.
Competing in 11 sports, the 84-strong Manx team won 97 medals at the six-day competition, 36 of which were gold.
Allan Bell said their success would “give the next generation something to aspire to and hopefully emulate and overtake at future Island Games”.
The island last topped the medal table in 1988 in the Faroe Islands.
Continue reading the main story
In total the Manx team won 36 gold, 36 silver and 25 bronze medals. The hosts Bermuda finished second in the medal table with 27 golds followed by Jersey, who will host the next Games in 2015, with 23 gold medals.
The Manx total eclipsed the island’s haul from 2011 when a 190-strong Manx team finishedsecond to Guernsey in the medal table, with 26 gold, 22 silver and 20 bronze medals in the Isle of Wight.
The Isle of Man’s gymnasts won around half the island’s 47 medals, including 18 gold medal performances.
The island’s chief minister Allan Bell said: “I think the outstanding success of our sports people will undoubtedly lift the spirits of people all around the island.
“They will be great role models for the younger generation coming through.”
The first members of the island’s team will arrive back on the island on Tuesday.
However, the Isle of Man’s record tally of 41 golds came when they hosted the Games in 2001.
More than 2,000 competitors from 22 islandsaround the world competed in 16 sports over six days.
The Isle of Man team participated in 11 sports including cycling, gymnastics, tennis and athletics.
The Bermuda Games were the first Island Games to be held outside Europe.