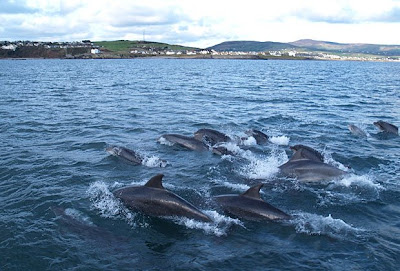 Following last week’s record of over 150 Bottlenose dolphins frolicking across Douglas Bay on the Isle of Man, the same pod were again spotted yesterday afternoon between Gansey and Port St Mary. This is the biggest single group seen off the Island since records began, and it is incredibly unusual for them to be sighted this frequently, indicating that they are obviously enjoying their stay!
Whilst it is rare to see such a large pod of dolphins, it is not uncommon to spot dolphins on the Isle of Man. There were approximately 604 reported sightings of whales and dolphins during 2007 alone with 1,700 sightings of animals in total. Visitors to the Island can also expect to see basking sharks, seals and porpoises.
Further information on whale and dolphin watching can be found on the Manx Whale and Dolphin Watch website www.mwdw.net