The annual Arrane son Mannin (Song for Mann) competition, which provides the Island entry for the Pan Celtic Festival Song Contest held in Ireland each year, was held at the Masonic Hall in Peel.

It was a successful event, which brought a number of Manx traditional musicians together to entertain an appreciative audience, prior to the competition itself and as the judges made their appraisal. 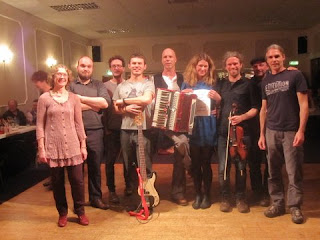 There were two entries this year, introduced by local Pan Celtic delegate, Fiona McArdle, which were Manx band Glashtyn (goblin or sprite from Manx folklore) which included song writers Andy North and Paul Rogers, who gave a lively and powerful rendition of their composition, Pynt dy Lhune (A Pint of Beer) and local duo Adhene (Themselves), with a gentle song by Paul Cringle and Wendy Hurst entitled Awin Auldyn (Auldyn River).
Judges for the evening were David Kilgallon, Dot Saunders and James Harrison, who gave forty percent of the marks for performance, thirty percent for lyrics and thirty percent for music.
The winner on this occasion was Glashtyn, winning a £300 prize sponsored by Culture Vannin, and securing a place in the Pan Celtic Song Contest later this year.
Meanwhile, Manx duo Adhene will also represent the Island at the festival in the New Song in Traditional Style Competition.
Entertainment was provided by Marlene Hendy and Dilys Sowrey, Ruth Keggin, Sarah Hendy and David Kilgallon, Manx Gaelic choir Cliogaree Twoaie, Bob Carswell, members of Tree Cassyn Vannin, Owen Williams and Troor son Daunsin.
With thanks to Culture Vannin for their continued support.
(Photo courtesy of Fiona McArdle)
Valerie Caine