Valerie Caine Posted on October 24, 2014 Posted in Uncategorized
Jude Dicken at Manx National Heritage in the Isle of Man trawls the Manx newspapers from years gone by for stories from and about the Manx in the USA.  You can too by visiting www.imuseum.im
Here’s just one of many stories waiting to be discovered… 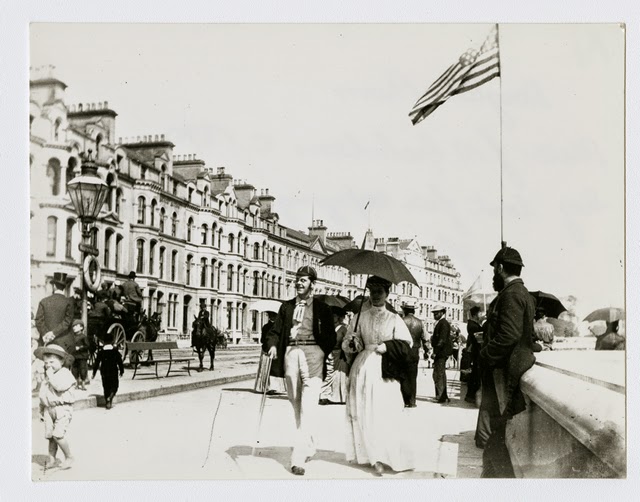 ‘Oh, say! can you see’ the stars and stripes in North Quay.  Well you could during TT2014.  As confident and brash as Wall Street there it was billowing full mast from a yacht in Douglas Harbour.  To me that flag had all the glamour of a Hollywood movie star.  It was as if a shiny vessel made-up-of yellow taxis, glassy skyscrapers and vast prairies had got amongst the herring fleet.  And there’s more to come.  In July 2014 the Island welcomed homecomers from the North American Manx Association.  Proof if it were needed that as great an urge to go west is the urge to return home.  Ain’t that so Philip Craine.
Philip, a native of Peel, emigrated for America in 1828 at

the tender age of 23.  Of the many to pass through Staten Island his was a success story.  By 1860 he was a wealthy New Yorker and made his first homecoming trip aboard the steamship City of Washington bound to Liverpool and his ‘Mannin Beg ma Chree’.

12 days and 12 hours out of New York and at last the Mersey.  Philip’s sister in Liverpool was gob-smacked by his unannounced arrival.  After thirty-two years ‘she did not know me, and I did not know her’.  Later aboard the Manx Fairy Philip wondered whether the same estrangement would be true of the Isle of Man.  He needn’t have worried.
A ‘black iron vessel with a crooked spout’ and a ‘well spread table’ made this Manx Yankee feel right at home.  Sure, ‘the people look different, talk different, and dress different to what they did thirty-two years ago’ but change had happened for the good.  The Island was furrows-ahead of America in its ‘farms and farming implements’ and its buildings and steamboats Philip thought splendid.  ‘While we here in America have our mind on the rack from early dawn to a late hour at night, the people in the Island to all appearance take the world comparatively easy, living on four meals a day.’  The ‘healthiest and best looking women, wives (not dolls)’ are what’s on offer on the Isle of Man.  It’s a wonder the Manx ever emigrated.
But they did, in their droves.  A Manx Wild West to rival Peel.  Letters from Kansas, Missouri and Illinois blaze a trail in the local press.  Like that of 1861 from ‘Illiam Dhone’, Oregon, to his cousin Juan Moor Jack.  Illiam describes Manx families out on the prairies, growing tension over slavery and a Peel man marrying Laughing Water, an Indian princess.
After two months Philip Craine went back to New York from where he’d write letters home until his death in 1886.  Later he’d recall how the ‘tears flowed freely from my eyes’ as the boat sailed past Maughold Head for the last time. ‘Land of my birth! with all thy faults, I love thee still!’ said Philip.  www.imuseum.im