↓ Skip to Main Content
Home › Uncategorized › Manxman to be scrapped

Manxman to be scrapped 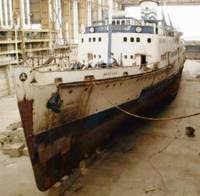 A passenger ferry which carried passengers to and from the Isle of Man for nearly 30 years is to be scrapped after campaigns to save it came to nothing. The Manxman, built by the Cammell Laird ship builders in Birkenhead and launched in 1955, sailed between the Isle of Man, the UK and Ireland until it was withdrawn from service in 1982. She has spent longer in ‘retirement’ than she spent ploughing the Irish Sea for the Steam Packet.

She had been at a shipyard in Sunderland since 1997. Enthusiasts had hoped to save her but their plans came to nothing and the shipyard has insisted that the boat – which is riddled with asbestos – must now be scrapped. IOMToday