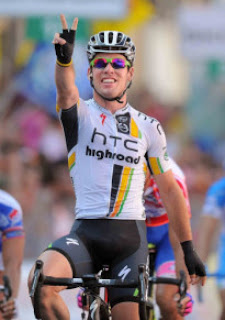 MARK Cavendish is being described today as the ‘David Beckham of cycling’ after his historic final stage hat trick of wins in Paris and the coveted green jersey in the Tour de France.

The Isle of Man rider’s face is over virtually every newspaper in Europe today, prompting the Beckham-like description from media writers.
Matt Slater of the BBC said today, “Mark Cavendish is David Beckham big in Belgium . . and not just in Belgium, but also France, Italy, the Netherlands, Spain… pretty much everywhere they love cycling.”
It’s a view repeated across the media where Cavendish’s face and his heroic feats in the Tour de France have been given blanket coverage in a way that even football fails to achieve. IOMTOday
It’s the first time a British cyclist has ever taken the sprinters’ green jersey and his five stage wins in the tour now give him 20 stage victories overall, placing him the 6th most successful Tour de France rider of all time.
Cav is now described as the fastest sprint cyclist in the world and was yesterday given the ultimate accolade by the highly respected British rider David Miller. Miller said, “He is Britain’s best athlete right now and probably the best sprinter in the history of cycling.
“”I know it’s always a big claim when you start calling people the best ever but he is that good and it is a shame that people at home don’t quite realise that yet.
“We have amongst us one of the greatest cyclists of all time. He is already the ‘David Beckham’ of Europe, in every country. Sadly, he’s not treated the same way in the UK.”