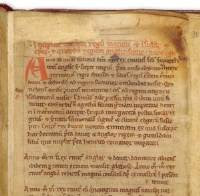 The Chronicles of Mann are the property of the British Museum (or so they say) and they’re hanging on to the book in the same way they clutch the Elgin Marbles. A polite request from the IOM has been turned down and now there’s hell to pay. The Manx people are taking it personally. They’re mad at the Manx Government for “rolling over” and they’re mad at the UK for being high-handed. Where do you stand?