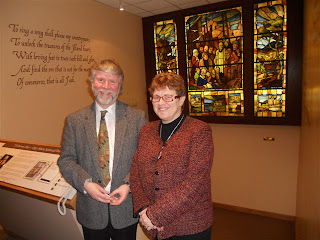 Edmund Southworth is the new broom at Manx National Heritage and he kindly spent time with me when I was visiting recently to discuss possible activities for the 2014 NAMA Homecoming Convention. This photo is taken in front of the famous T.E. Brown window which features characters from the “Fo’c’sle Yarns” and which was installed in its new location thanks in large part to a generous donation by Past President and Honorary Governor of NAMA, Robert Kelly of Illinois.

Edmund was previously Director of Lancashire Museum Service (since 2000). Born in 1956 Edmund began his career as an archaeologist with Central Lancashire Development Corporation in 1977 and progressed in various Museum posts in Merseyside and Lancashire. He was in charge of 14 Museum and Heritage sites with over 240,000 visitors a year. He served on the U.K. Heritage Lottery Fund Committee for the North West and founded the Lancashire Heritage Attractions Network working with Tourism partners.And now he has come to land on the Island in charge of Manx National Heritage and its many locations and responsibilities. Look our for exciting developments from this quiet but determined man.