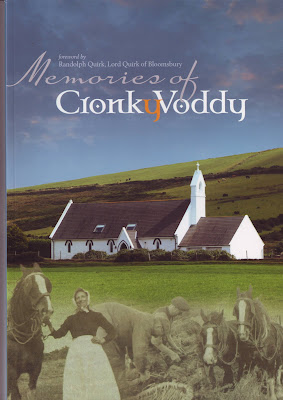 Life has changed a great deal in Cronk y Voddy over the years, but the community spirit remains steadfast which is reflected within the pages of ‘Memories of Cronk y Voddy’, a new book published by Lily Publications.

A small number of families farmed the area, with a great deal of the book exploring their lives and daily activities; a group of hard working, generous and self sufficient people who simply got on with their lives.

Randolph Quirk, Lord Quirk of Bloomsbury, probably the most celebrated of Cronk y Voddy’s sons has written the foreword for this book, painting an evocative picture of his own upbringing in the 1920s.

Much is written about the area including the local school, the ploughing match society, church and chapel and the infamous clubroom, but you can also read about the notoriously deep snowdrifts experienced in the locality over the last two centuries. The book also looks into the nearby areas of Little London, Lambfell and Glen Helen which all have interesting tales to tell, but it’s worth buying the book simply for the fascinating collection of photographs it carries depicting some of the many characters of the area.

Affectionately known as ‘Cronky’, by both residents and others across the Island, this valuable, historical record of Cronk y Voddy has been a labour of love from within the community and has been well worth the effort.

Priced at £15 ‘Memories of Cronk y Voddy’ is available in bookshops throughout the Island.