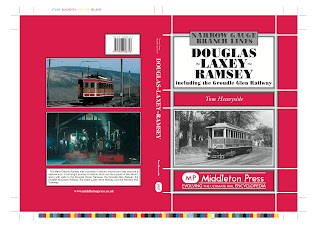 Covering a wide spectrum of railways, trolley buses, military and waterways across Britain, Europe, South Africa and the Isle of Man, the UK based Middleton Press is busy evolving the ultimate rail encyclopaedia, with one of its most recent publications focusing on the many railways operating between Douglas and Ramsey.
There’s a nostalgic feel to this book by Tom Heavyside with its attractive red cover and a good selection of photographs largely from the period 1950s – 1970s. Using black and white images throughout which complement the book, rather than detract from its appeal, it’s a time capsule showing varying degrees of change to the Manx landscape.
With some additional historical background to set the scene, this book tells its story succinctly with bite-sized amounts of detail to whet the appetite of the reader.
Opening with a taster of the Douglas Horse Trams, the author heads swiftly towards Derby Castle, with time to look briefly into the Car Sheds which remain relatively unchanged. Our pictorial journey then moves onto the main line as we follow the track up to Port Jack and wend our way slowly along the scenic east coast towards Ramsey.
There are a number of diversions along the way for the railway enthusiast, with breaks in the journey at the Groudle Glen Railway and the Laxey Car Shed, before moving briskly on to the Snaefell Mountain Railway, with time to explore the Snaefell Car Shed and the Great Laxey Mine Railway before finally heading towards the Ramsey Car Shed and memories of the now redundant Ramsey Pier Tramway.
Priced at £15.95 from local bookshops and newsagents, or direct from the publishers.
www.middletonpress.co.uk
Valerie Caine © October 2011 (Courtesy of Manx Tails)