MNH do yet another cool thing ~~~ A Festival of Archaeology

Medieval knights, Shakespearean actors and Viking soldiers will be taking over the Isle of Man for its first Festival of Archaeology.  Manx National Heritage has devised the programme, which includes festival screenings of Hollywood archaeology movie classics, tours of the Island’s ancient sites and Shakespeare plays.
Keen historians can also take part in a sunset tour of Peel Castle. Allison Fox, archaeology curator, said: “We have such a wide variety of sites.” 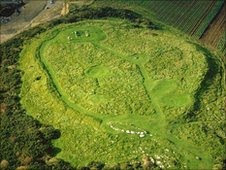 The island has prehistoric burial sites (Like the photo: Balladoole is a Viking burial site on the Isle of Man), through to Viking ship burials to structural remains of the key role the island played in the development of radar in wartime.
Visitors will also be able to join archaeologists and demonstrators and have a go at some experimental archaeology, learn about Neolithic pottery design and investigate the archaeological heritage of Cregneash.
Ms Fox added: “During the two weeks of the Festival of Archaeology, we hope to be able to share some of this fascinating heritage and to encourage those who are curious about the past to go out and discover even more for themselves.”
The Festival begins on 17 July with a screening of two movies, Indiana Jones & the Raiders of the Lost Ark, and National Treasure (Super cool film and great introduction to US history!!! Ed.)
BBC