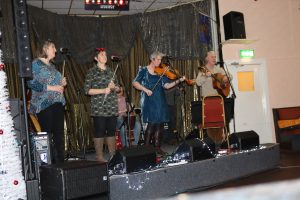 The much loved, annual Mollag Ghennal, which has its roots in the Garden Room of the old Villa Marina, before the Mollag Band took over the baton from the Calor Gas Ceili Band in 1993, celebrated its twenty fifth anniversary during the festive season. 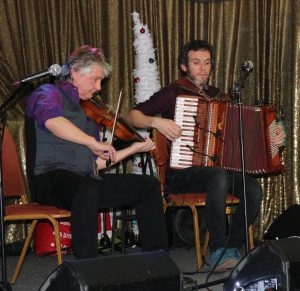 It’s a tried and trusted format still favoured by the event’s many followers, who enjoyed a relaxed evening of mostly local entertainment at the Manx Legion building in Douglas. This year organisers welcomed Sel Edwards who provided both Welsh and Manx music, local singer/songwriter Matt Kelly, Imbolc (hotfoot from performances in Belgium), up-and-coming group Scran with their new album Nane, father and son duo Frank and Jamie Joughin and Manx dancers Skeddan Jiarg.

Meanwhile, the Mollag Band presented a new dimension, described by lead vocalist Greg Joughin as the musical equivalent of modern art, with groups of lyrics connected simply by vague association. An abstract image formed through the ears of the listener, a kind of melodic Matisse. 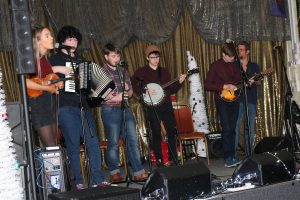 Supper was provided by the Mollag Kitchens.

As well as the usual self-penned, original songs from the Mollag Band, the evening concluded with a revolutionary mix of community singing linking Victorian music hall and Manx folk classics from the 1970s.