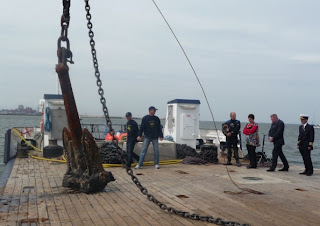 The anchor from the Mona’s Queen, one of three Isle of Man Steam Packet Company ships lost at Dunkirk in May 1940, is on its way home.
The anchor was raised last year after an initiative involving the late Captain Andrew Douglas and Captain Hamish Ross to return it to the Isle of Man to form a memorial to all Steam Packet Company staff who lost their lives during World War Two.
Now, thanks to the generous help of Manx Independent Carriers and Cammell Laird Shipyard, where the ship was built, the anchor is on its way home from Dunkirk via Cammell Laird, where it will undergo restoration. Manx Independent Carriers provided transport from Dunkirk to Cammell Laird in Birkenhead. where the anchor arrived on Friday, 28 January. 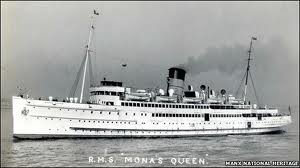 The Mona’s Queen was one of eight Steam Packet Company ships which between them rescued 24,669 troops as part of Operation Dynamo. The other ships lost at Dunkirk were Fenella and King Orry.

Following the death of Captain Douglas in January last year, Captain Ross set about ensuring that the idea became a reality. This involved working with the relevant Isle of Man, UK and French authorities who were most helpful and culminated in the raising of the anchor becoming an important element of the 70th anniversary commemoration of Operation Dynamo that took place in Dunkirk on 29 May 2010. The moving act of remembrance was attended by the Chief Minister The Hon Tony Brown MHK, Captain Ross and Steam Packet Company representatives, Captain Kane Taha and Director of Marketing and Communications David Findlay.
Isle of Man Steam Packet Company Chief Executive Mark Woodward said: ‘The raising of the anchor attracted much interest both on and off-Island and the Steam Packet Company is delighted with the response from both the public and the business sector.
‘Manx Independent Carriers was happy to work with us to transport the anchor home to the Island and the team at Cammell Laird was only too happy to get involved. It is fitting that the anchor, while in very good condition, will be restored at the shipyard where the ship was built and launched in April 1934.’
Mr Woodward explained: ‘We want to ensure that the anchor is displayed in a fitting memorial that will be readily accessible for the people of the Island and its visitors, and where they can learn about, and reflect upon, the Island’s significant and proud contribution to Operation Dynamo, which had a major impact on the outcome of World War Two. We will be reviewing suggestions for the proposed site and will be making an announcement within the next few weeks.’