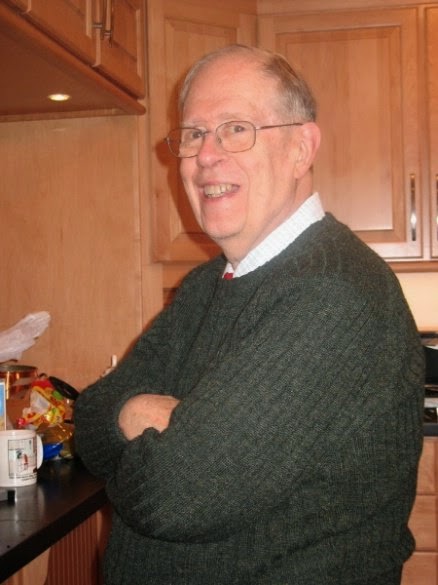 I received this today from Tina, Marshall’s wife of 62 years.

Marshall Hopewell Cannell, Jr., passed away unexpectedly on March 11, 2014, at the age of 83 from a stroke and cardiac arrest.

He was born in Providence, Rhode Island, son of Marshall H. Cannell, Sr., and Sarah Catherine McKenzie Cannell. He graduated from the Moses Brown School and Brown University in Providence. Upon graduation, he worked in jewelry manufacturing; and in 1956, he began his career with Lincoln Labs training at IBM in New York to become one of the first computer programmers in the country.  The term ‘computer programmer’ was totally foreign at the time, and it became a guessing game he enjoyed when he was asked what it meant.

The Rand Corporation entered into the picture, followed by Systems Development Corporation (SDC) where he began his long career as a systems consultant to the US Air Force.

His assignments took him and his young family to Levittown, PA (the first Levittown in the country), Petersburg, VA, Woodland Hills, CA, and Ridgewood, NJ. In 1967, his assignment was to SDC offices in Bedford, MA, and Wellesley beckoned because it was a village very similar to Ridgewood, NJ.

In the course of his career at Rand and SDC, he was the Site Leader in charge of the installation of the computer programs for the Sage Automated Air Defense System, worked for the Strategic Air Command’s automated system, the AWACS aircraft.  He retired in 1991 as a systems engineer at the MITRE Corporation working on automated command and control systems for the Tactical Air Command.

Following his retirement, he was invited to be the Drama Technical Advisor as a member of the Performing Arts Department faculty of the Wellesley Middle School, and served 15 years teaching Technical Theatre and the Origins of Western Drama.

His community service included three terms as President of the Wellesley Players, Wellesley’s amateur theatre society, and 30 years on their Board of Directors. Marshall was one of the original founders of the Eastern Massachusetts Association of Community Theatres (EMACT) and served on the board of the Milford, MA, Theatre Company.

He was elected President of the Wellesley Amateur Radio Society, serving the town for many years as the Civil Defense Radio Officer. As an official of the Air Force Military Affiliate Radio Service (MARS), he participated in handling and forwarding morale messages from servicemen fighting in Vietnam.

Marshall was a fixture on election days at Precinct C in Wellesley, working at the poll as recently as the week before his death. As a member of the Maugus Club in Wellesley Hills, he also served on the Board of Directors as President and many years as Property Manager.  He served for a number of years as Tournament Director for the Massachusetts Indoor Badminton Association.

Two of his most cherished positions were as President of the North American Manx Association (NAMA), whose ancestors of members in the United States and Canada come from the Isle of Man, Great Britain.

Being an usher at the 8:00 AM service at St. Andrew’s was central to his church contribution.  He was there come what may…he looked forward to the camaraderie with his fellow usher, Jane Givens, the regular attendees, little chats with the clergy.  His other contributions at church were in the early 80s, every Sunday breakfast after the 8:00 AM service, and for 10:00 AM service attendees, who found the breakfasts a pleasant short period of camaraderie with the “early birds.” Marshall, Buck Bukaty, and Bob Hehre, RIP, were the brains and brawn behind these very successful breakfasts. Their wives were the staff, and there was great banter and laughter every single Sunday.  Marshall, Buck, and Bob would have lively discussions about all manner of subjects, many of which resulted in them going home to research the subject to see who was right at the end of the discussion!

The breakfasts spawned the formation of two groups, again headed by the three chefs:  the SAGS, and the SAPS.

The St. Andrew’s Gourmet Society (SAGS) was responsible for the breakfasts and for any and all dinners which were required or planned spontaneously.  Marshall, Buck and Bob volunteered to cook meals for a country-wide ‘Faith Alive’ celebratory conference of about 200 participants to be hosted by St. Andrew’s.  Great job, indeed.  A huge success of people from all over the country expressing their faith in a supportive community.  Marshall and Valentina ventured into organizing a dinner dance at the Maugus Club, which at the time was a social/athletic club.  That began Marshall’s venturing into catering.

He developed an impressive clientele. He catered a number of weddings, engagement parties for members of the club, wedding for one of his bosses at the MITRE Corporation, before he had to lay down his apron! So the SAGS fulfilled his love of cooking.

With the St. Andrew’s Painting Society (SAPS), we all painted and spruced up the basement children’s areas every summer, as well as small jobs throughout the church building.  His catering extended to fund raisers in Wellesley for the Moses Brown School, and for Brown University Annual Fund…he would cater a light supper for all participants at whatever office had been made available by alums.  Marshall was Class of ’48 secretary at Moses Brown School for a number of years and was elected President of his class of ’52 at Brown University also for a number of years.  He and Valentina celebrated his 60th reunion, their 60th wedding anniversary at the class reunion in 2010. They had celebrated his 65th reunion at the Moses Brown School earlier.

He was the cook at home, needless to say, and will be sorely missed.

Marshall is survived by his wife of 62 years, Valentina Cannell (nee Baudel de Vaudrecourt). He also leaves his daughter Bonny Cannell Nothern and her three children, daughters Alexandra and Blaise Nothern of Acton, MA, and son Denis, Jr. and his wife, Kristen Reinken Nothern of Watertown, MA, as well as his daughter Alejandra Cannell Huete and her husband, Dr. Jorge Huete-Perez, and their son J. Gabriel Huete-Cannell of Acton, MA, and Managua, Nicaragua.

Other dear survivors are his sister Mary Catherine Cannell-Andrews, her husband John Andrews, and his niece Sarah Andrews, of Alexandria,  his brother, Christian Greenleaf Cannell and his wife, Joan, of Pownal, Vt.