↓ Skip to Main Content
Home › Uncategorized › More on the Pepperpot

More on the Pepperpot 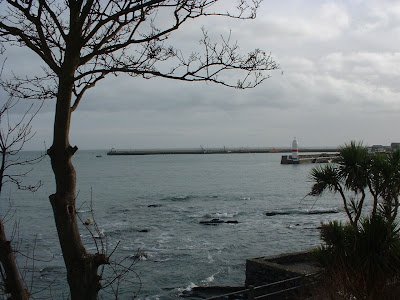 You’ll have seen the pictures on iomonline and read the remarks regarding PSM’s talking-point of the day. Here’s a picture taken today. We had horrendous winds for about 48 hours and, as the sea pictures from around the Island show, mountainous seas. Looking at what is left of the lighthouse it’s not surprizing that it went overboard. There are several fracture lines and all of them flawed by with deeply encrusted cracks. I think a wheel tapper should now be employed to sound the other similar cast-iron structures on the Island’s piers. The lighthouse in the foreground is on the Inner Harbour — it’s the one on the Outer Breakwater that was swept away.

This building was secondhand when placed in PSM in 1882 (when Prince Alfred performed the opening ceremony). It first stood at the end of the Port Erin Breakwater before the sea demolished that structure. (As in the black and white photo)