Valerie Caine Posted on May 12, 2017 Posted in Culture, History

A unique collaboration between some of the brightest talent from the Royal College of Music, professional soloists and a selection of young performers from the Isle of Man (second concert only) will highlight an important aspect of internment on the Island during World War II later this month.

Initially brought to the stage in April at The Liberal Jewish Synagogue in London, under the title of The Barbed Lyre – Leaves from the Isle of Man, this expressive performance incorporates a rich variety of music composed by German and Austrian refugees facing enforced isolation during the turbulent war years.

Items on the concert programme will include the bilingual revue What a Life! by Hans Gál, an equally moving and humorous piece of musical theatre inspire 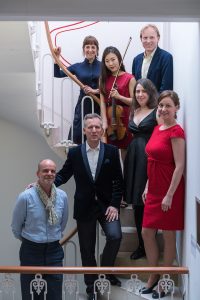 d by daily life within the internment camps, which was performed to enthusiastic audiences in the Palace Theatre in Douglas during 1940, and recreated especially for these specific performances. The programme will also include excerpts from the work Ursonate by the Dadaist artist Kurt Schwitters and other notable composers.

The group of twelve singers and instrumentalists, lead by tenor Norbert Meyn, will also present chamber music from this period in Manx history, which will include Mooragh by Ramsey based internee Peter Gellhorn and Manx dance tunes arranged by W. H. Gill, as well as some popular, old favourites such as I’m a Native of Peel and Has Anybody Here Seen Kelly?

The project is kindly supported by the Isle of Man Arts Council, Culture Vannin and the Malcolm Scott Dickinson Charitable Trust.