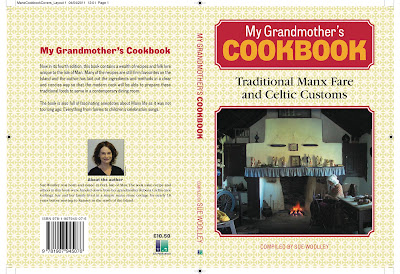 Now in its fourth edition Sue Woolley’s popular cook book can be found in many kitchens both here and overseas, but it also serves as an interesting historical testimonial to the old Manx way of life dominated by hard graft and self-sufficiency.
Some of the recipes have been handed down from the author’s grandmother, Rebena Crellin, which gives the book a more personal feel, and many have a seasonal flavour, or are indicative of the time of year; such as Soddag Valloo (the Dumb Cake), Hollantide Fairings, or the Michaelmas Goose.
In addition Sue has included a selection of evocative black and white photographs (some with kind permission of Manx National Heritage), with biographical snapshots of two of the main photographers (Cowen and Southward) who sought to record the vestiges of the old way of life, many of them previously unpublished.
Also included are some tantalising extracts from ‘Vocabulary of the Anglo-Manx Dialect’ compiled by A. W. Moore to whet the appetite of the reader.
The busy Manx housewife may have had little variation in her store cupboard, but she was nothing if not resourceful. There was little waste and although plain fare her cooking was nourishing and healthy.
Many of the ingredients can be bought easily on a contemporary shopping trip, with recipes to suit all occasions, and with easy to read conversion charts at the turn of a page there’s really no excuse not to rustle up a pot of Manx broth, or learn more about how to cook Tanrogans. But if you want to know more about the magnificent Dalby Sandwich you’ll have to buy the book!
Priced at £10.50 ‘My Grandmother’s Cook Book’ is available from the Lexicon Bookshop, the Manx Museum, House of Manannan and other Island outlets.
Valerie Caine © November 2011