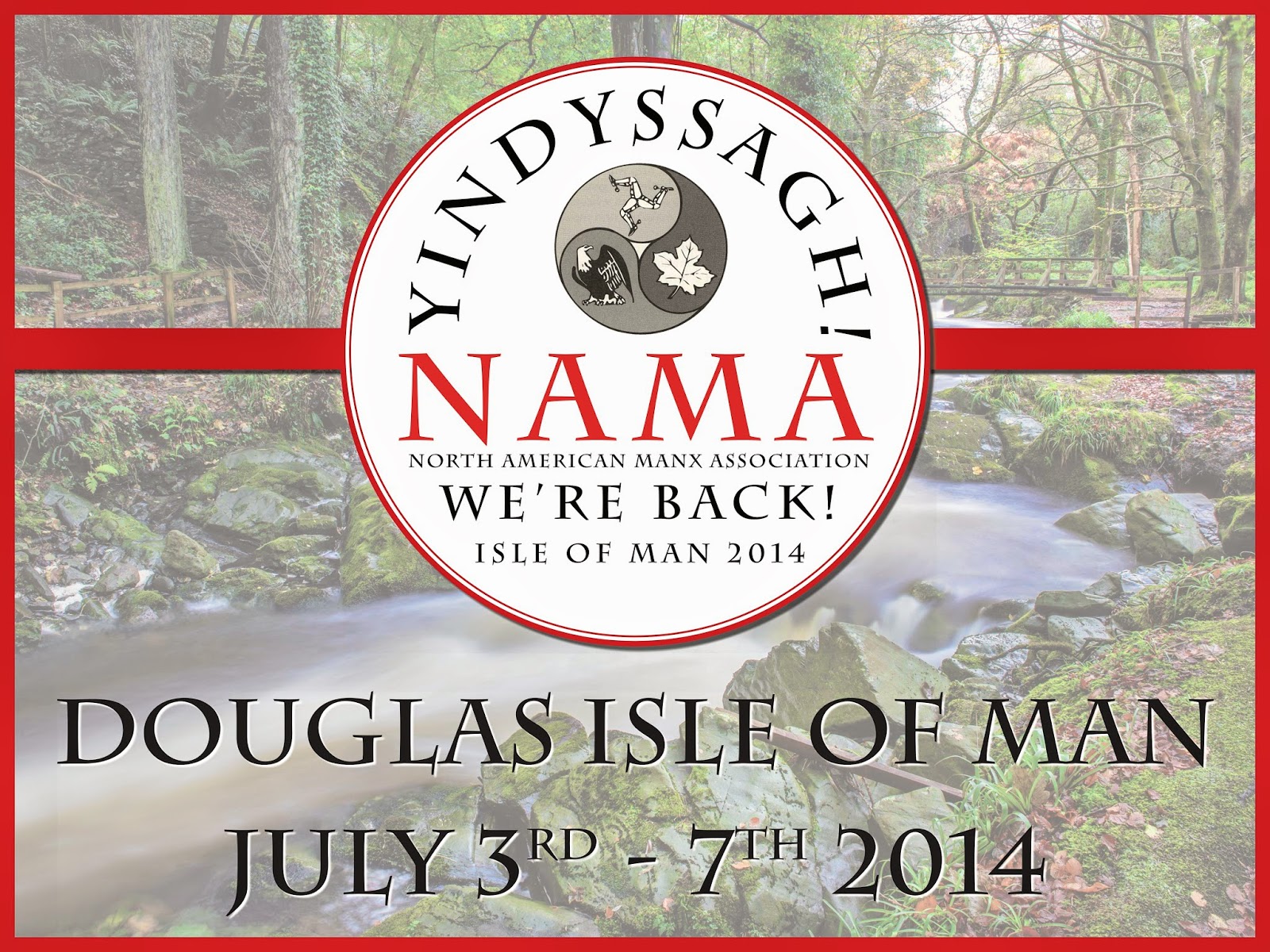 Day One of the NAMA 2014 Convention was spent checking in our 64 delegates and doling out tickets for events to our party of official members and the other large group of Peterson family members who came along with Lucy. We have around 90 American Manx, two Canadians and one Australian on this trip!

During check-in, by Anne Minay and local volunteer Voirrey Horne, members were able to purchase locally produced fudge and Manx knobs from our friends at the Manx Fudge Company.

Thanks to the kindness of Madame President Clare Christian we were taken on a tour of the three houses of Tynwald and the NAMA Board was afforded the very great honor of holding our annual meeting in the Legislative Council Chamber. The minutes from this meeting with reflect the fact that we did indeed go back.

In the evening, Manx National Heritage hosted us at the Museum where we could tour the fabulous exhibits including their collection of World War I artifacts. They even brought out Kearsley Walsh’s great-uncle’s uniform from the Boer War. Among the guests welcoming us were His Worship and Mrs. Stan Cain, the Mayor and Mayoress of Douglas, Mr. Alex Downie, OBE, MLC and Mr. Edmund Southworth of Manx National Heritage. Many of the MNH trustees had come to welcome us and mix with this large group of American visitors.

We were entertained with wine and Manx cheeses under the bleached bones of the great whale suspended in the room displaying the animals that share the island.

Day Two Friday July 4th started with the laying of a wreath at the Manx Aviation and Military Museum, Ronaldsway Airport in Ballasalla. Our friend Ivor Ramsden had worked hard to create a Canadian Memorial Garden to commemorate the lives of 28 Canadian airmen who died in flying accidents in the Isle of Man between 1941 and 1944. 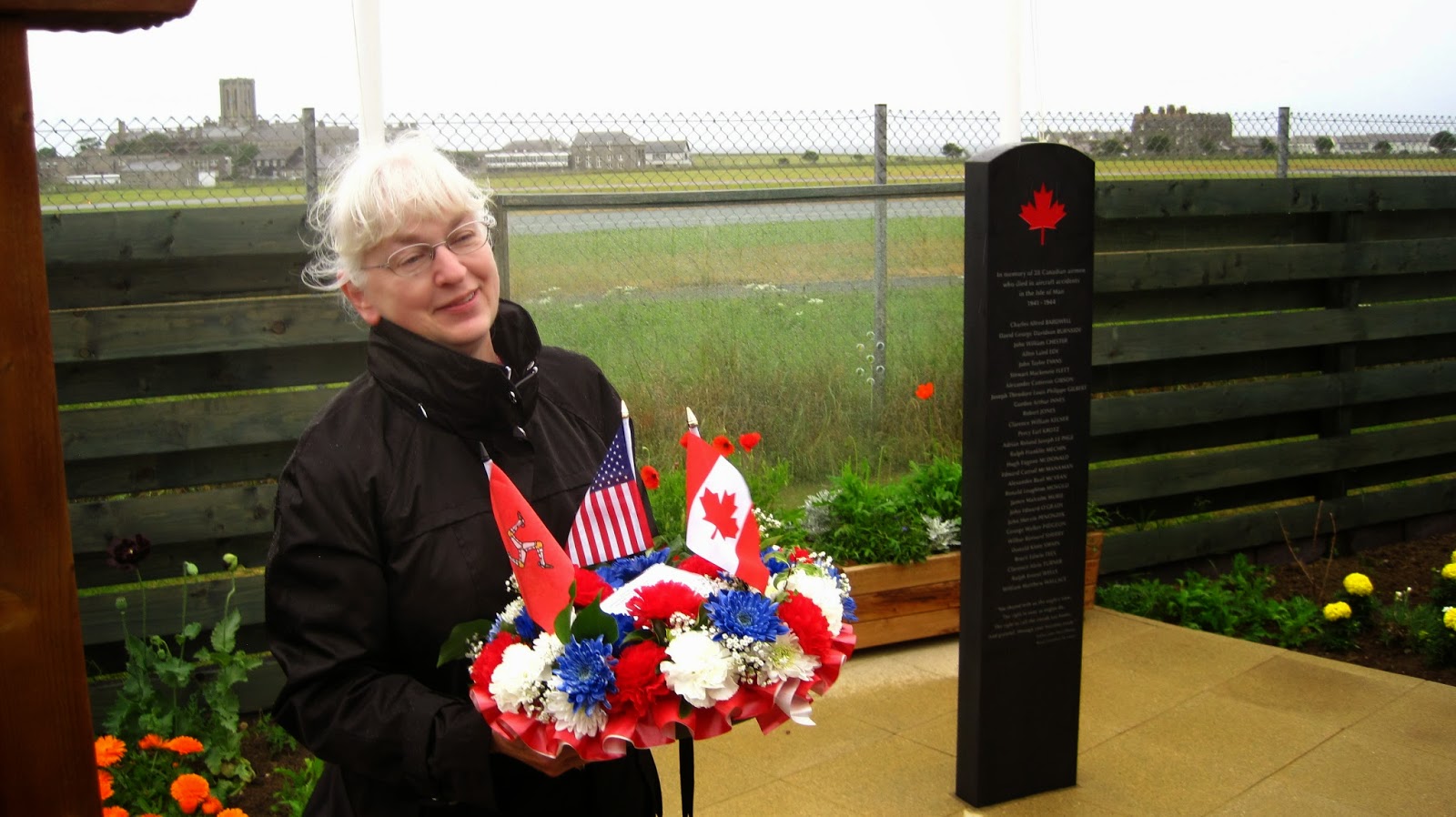 Then we drove, in pouring rain, to Cregneish. We were fortunate to have Andrew Foxton onboard  our buses (he swapped between them) who is an experienced tour guide. He described where we were driving and how important the living folk museum is the history of the island. (You may have seen it featured in the movie, Waking Ned Devine.) We also stopped at the Sound for a breathtaking — and windy — photo op. Thanks to Manx National Heritage — especially Edmund Southworth and the Trustees — for all their support and assistance in putting together this trip. 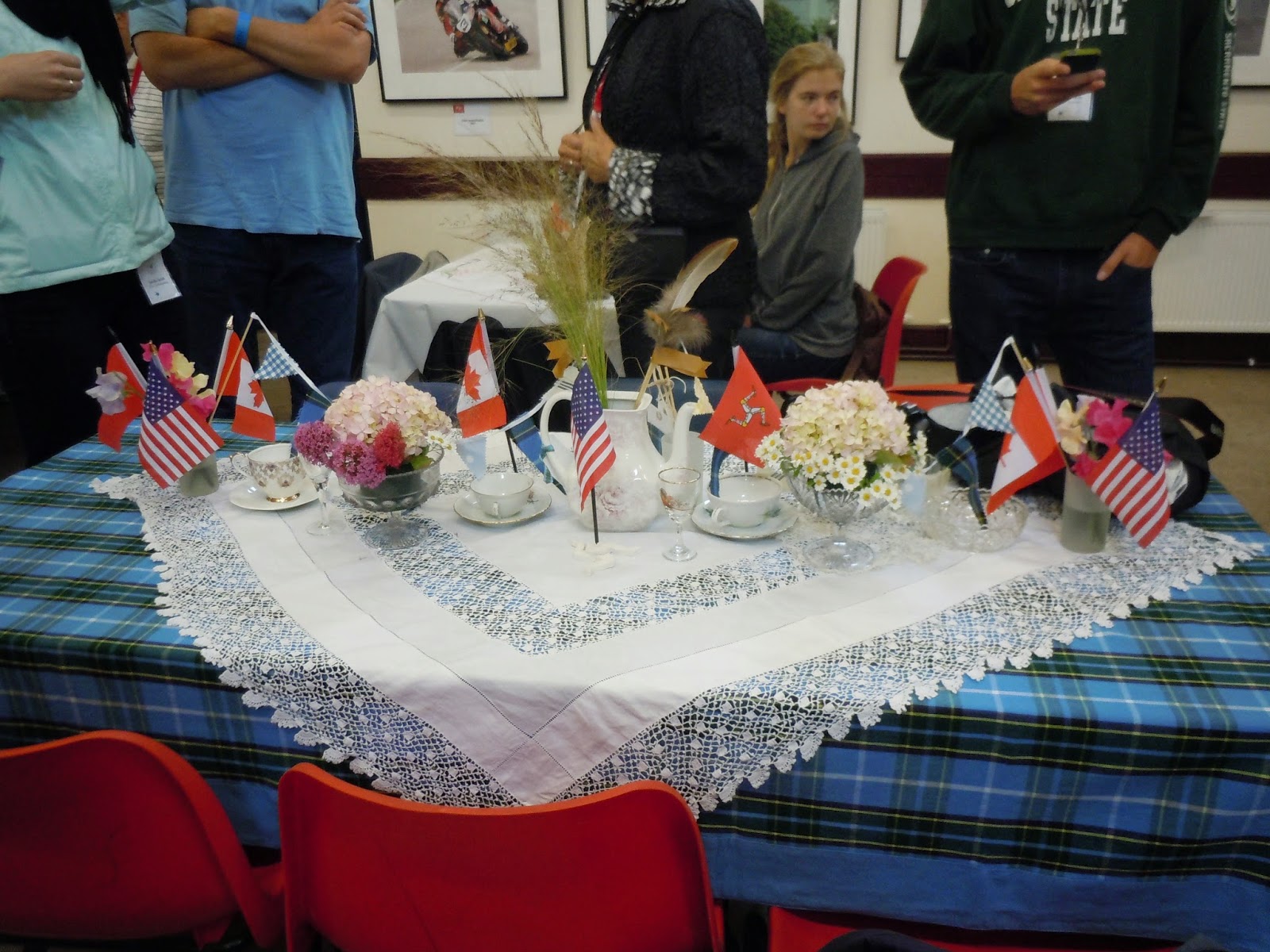 Lunch was a catered affair at the Castletown Civic Centre. We were met by Chairman of the Commissioners, Richard McAleer and other local dignitaries. The hall had been beautifully decorated for us by Dawn Scott. Castletown very gracefully presented us with a gifts bearing their symbol and we responded with a gift from Mount Vernon, home of George Washington. 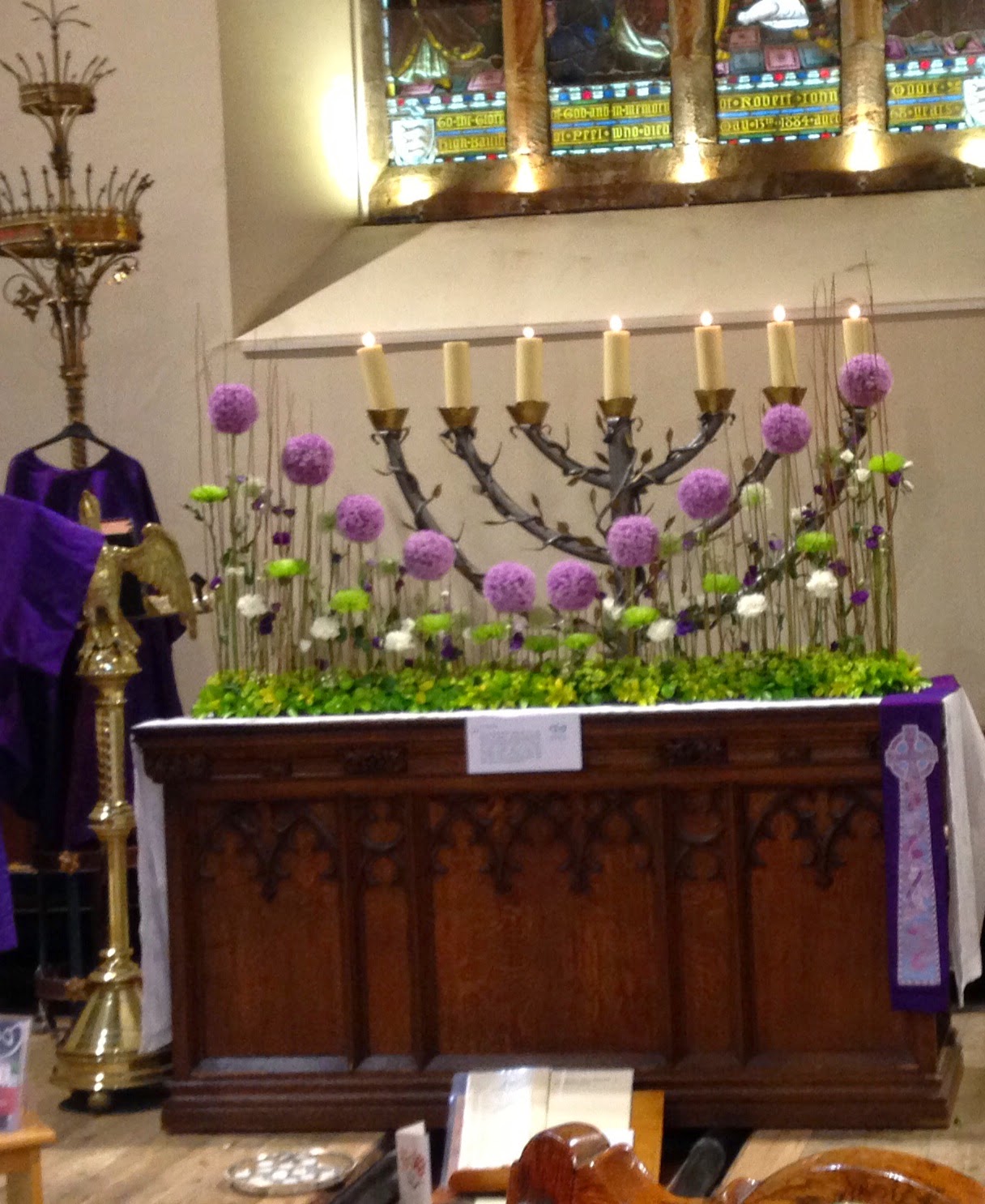 After lunch we visited sites in Castletown including The Nautical Museum, with “The Peggy” a perfectly preserved old schooner from the ‘Running Trade” which has been boarded up and left undisturbed for many years. We also visited the Old House of Keys, and many went to clamber around Castle Rushen. From there, we went to Peel and received a generous Afternoon Tea from the Dean and Chapter of the Cathedral Isle of Man. 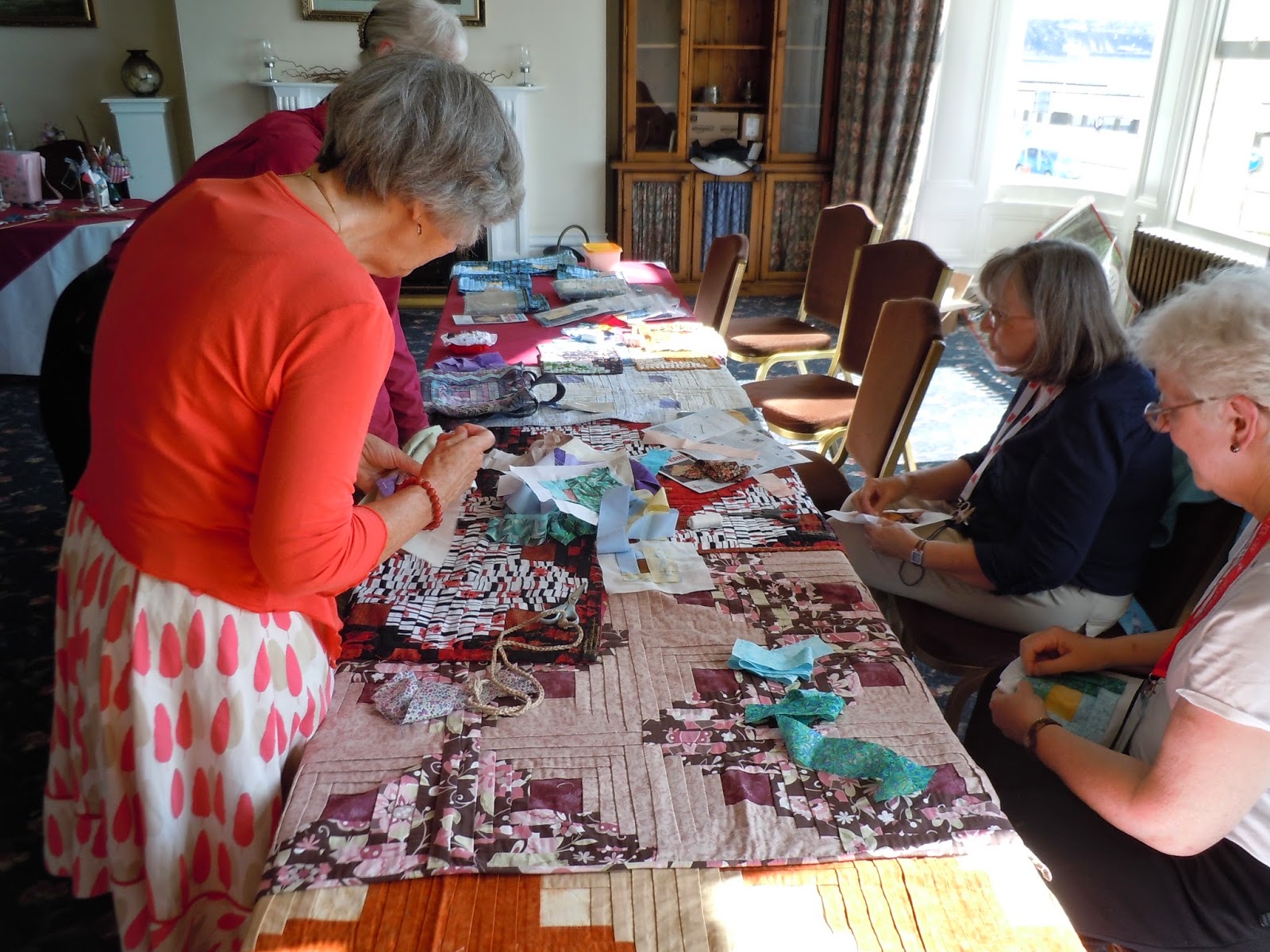 …and including a talk on Y-DNA and Manx heritage. In the evening we held our Convention Dinner.

The Convention dinner was held in the Sefton hotel and also featured beautiful and elaborate table decorations featuring Manx flowers and fabrics made — yet again — by the very talents Dawn Scott.

During the dinner a special award carved from Manx Mountain Ash was made to Florence Abbinanti who was celebrating her 22nd NAMA Convention at the tender age of 93.  A gift was also presented to former Chief Minister Donald Gelling whose birthday is Tynwald Day, July 5th. David Nixon accepted the NAMA Youth Award from Minister Tim Crookhall on behalf of Sometimes Y, the Massachusetts-based dance group that entertained crowds at Tynwald Fair in 2013.  Anne Minay, the Island organizer of the Convention was presented with an American flag throw and to her great surprise, Honorary Life Membership of NAMA.

We were beautifully entertained by Mandy Griffin who movingly explained that the Cleveland Medal was the event that had inspired her to become a singer when she was just ten years old. She went on to sing the songs that secured her fourth victory in the highly competitive Cleveland Medal competition at the Manx Music Festival, or Guild as it is known on the island.

Alex Downie, our Guest Speaker and great friend of NAMA, gave a great speech about the Manx who had left for America and the fact that not all of them were model citizens (!) before describing Manx successes of the past few years in economic, social and sporting fields.

During the dinner,  Jack Cormode, as the senior Past President present, officiated as 1st Vice-President Kelly McCarthy became President and the 2014 slate of members was approved by the General Membership. We welcomed new Trustee, Bill Cassidy and our new 3rd Vice-President, David Nixon.

Adrian Cain, the Manx Language Officer, ended our evening by drawing the raffle in Manx and teaching us a few phrases including the expression “Ta mee toiggal beggyn Gaelg” (I understand a little Manx!) We closed the evening with a rendition of “Ellan Vannin”  bolstered by local singers in our midst including Noel and Mary Cringle, Dollin and Jean Kelly, Donald and Joan Gelling as well as the inestimable Mandy Griffin.

Sunday July 6th
We started our proceedings in the atrium of the Villa Marian Arcade with the National anthems sung by the sparse collection of members accompanied on the Mighty Wurlitzer. It was magnificent! Thanks to the staff involved for organizing this. Following our Board meeting we were treated to a backstage tour of the Gaiety Theatre and all its secrets including the world’s only Corsican trap. 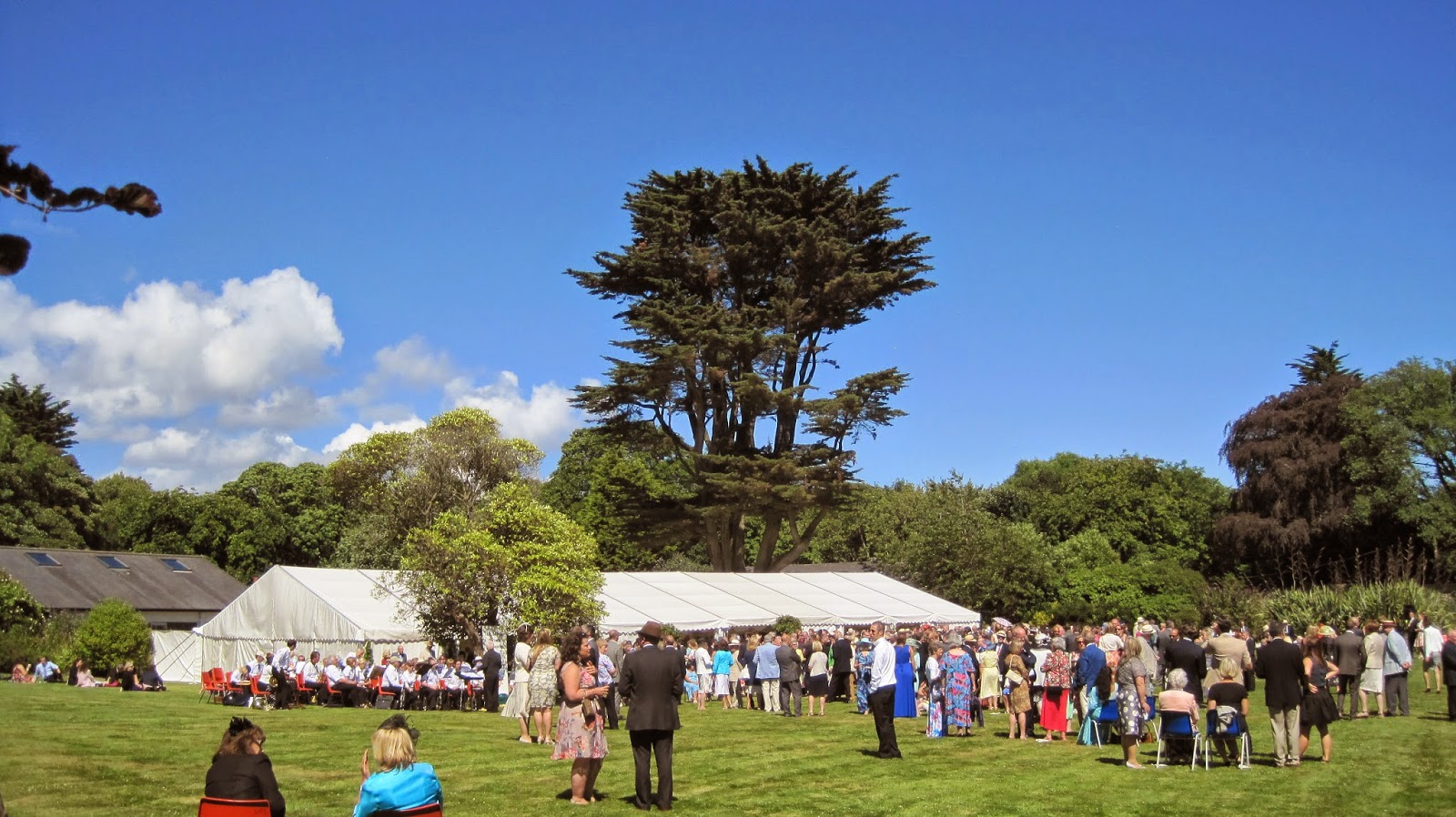 Then it was off to get changed for the Tynwald Garden Party at the Nunnery! Hats and frocks were in abundance. Margie Martinsen had hand assembled her entire costume! We were guests of Tynwald and treated to a beautiful day as well as tea and cakes on the lawn. All very Downton Abbey!

Our last call on Sunday was a Memorial Service at Loch Promenade Church to honor our deceased members and celebrate our wonderful Association of Manx people and this great trip back to our roots. Afterwards we stepped upstairs and were served a delicious meal of Fish and Chips delivered by the Terrace Chippy!


Our last day of the Convention was very special. The President of Tynwald, our dear friend, Clare Christian, had organized grandstand seats for us to watch the ancient ceremony of the promulgation of the 2014 laws.

Presidents Jody Morey and Kelly McCarthy were given guest tickets to the St. John’s Chapel for the service and signing into law of the Acts.

Because of Tynwald, the Sefton Hotel kitchen and serving staff was called away to work at the nearby Villa Marina where Tynwald was hosting its members and honored guests. So we asked the local Italian restaurant, The Italian Job, whether it would open up specially for us. What a great buffet meal! It was fantastic.

From there, and to end our Convention, we gathered for one last time in the Garden Room at the Sefton Hotel for a Cooish.

Celebrated local reciters, Dollin Kelly and Anne Clark entertained us with Manx readings and we sang some classic Manx songs accompanied on keyboards by John Riley.

The eagerly anticipated draw for the Manx Quilt was won by Margie, who lived up to her nickname of Tigger by shooting out of her chair, which spilled over backwards, and bouncing excitedly around the room shouting,”I won it, I won it!”

With one last chorus of Ellan Vannin and a thank you toast proposed by Jody Morey, the 2014 North American Manx Association Convention drew to a close. Thank you to everyone who help to make it such a great success. The Manx welcome was more than we could ever have anticipated. Gura mie eu, Ellan Vannin.