NAMA presents US flag to Manx Aviation and Military Museum

On February 7th, the North American Manx Association (NAMA) presented a special U.S. flag to Ivor Ramsden of the Manx Aviation and Military Museum at Ronaldsway.

The story behind this presentation dates back to a tragedy that occurred in 1945 and is marked each year by a pilgrimage up North Barrule.

Boeing B-17G Flying Fortress number 43-38856 was one of 13,000 built at the Boeing factory in Seattle, Washington. Following completion and flight-testing the aircraft was delivered to the United States Air Force on 30th September 1944. Next month the B-17G flew the 3,000 miles North Atlantic supply route from Maine via Greenland and Iceland to arrive in the United Kingdom where it was assigned to the Eighth Air Force, 381st (Heavy) Bombardment Group, 534 Squadron, based at Army Air Force Station 167, at Ridgewell, Essex.

Missions carried out by the 381st while this B-17G was with the group were varied. During the German offensive in the Ardennes (the Battle of the Bulge) in December 1944, the 381st struck at airfields and communications in the battle zone. In March, 1945, the group provided air support for the Rhine crossing and then operated in the final push through Germany.

Towards the middle of April 1945, the talk at Ridgewell was of the war coming to an end. Operations though, were still being flown and from April 9th to April 21st the 381st flew ten combat missions, all deep into Germany. From all ten missions all aircraft returned safely.

On Monday 23rd April, 1945, just two weeks before the end of the war, no operations over Germany were planned for the group and a flight was organised to take a group of servicemen from nine different units on a week’s leave to Northern Ireland. The men chosen for the leave were the support servicemen, the ground crews, armourers, mechanics and fitters. These were the people who kept the aircraft flying, combat-ready and safe. Some of these men had been at Ridgewell since the 381st arrived in June, 1943 and for most this was their first real break.

That morning their B-17 flew into the side of North Barrule killing all 31 personnel in the worst air crash the Island has ever seen. The men were buried on the 27th of April 1945 at the American Military Cemetery at Madingley, near Cambridge.

In 1995, Maughold Commissioners and the Manx Aviation Preservation Society erected a memorial plaque and flagpole at the crash site. Every year since, Mike Corlett of Laxey leads fellow members of the Manx Aviation Preservation Society up North Barrule where they fly an American flag over the spot for a week to commemorate the tragedy. Mike visited the crash site as a boy soon after it happened in 1945 and remembers the scene of devastation on the hillside with broken and burnt parts of the aircraft spread over a wide area. Mike said: “The scene where all those men died left a lasting impression on me; I hope that our flying the flag will continue for many years and become a tradition.”

Fast forward to 2010: the Society’s American flag was becoming severely weatherbeaten due to the high winds which scour the hillside and reports from the Isle of Man about its condition reached the North American Manx Association (NAMA). An immediate Board vote was held to purchase a new flag to honour the fallen airmen. Kelly McCarthy, 2nd Vice President of NAMA and one of the island’s worldwide network of Honorary Representatives, arranged with her U.S. Senator to acquire a flag that had been flown over the Capitol Building in Washington D.C. A fitting tribute to the men who lost their lives in service of the United States.

Ivor Ramsden, director of the museum at Ronaldsway, was very impressed by the Association’s efforts: “After several week-long periods of exposure to the weather on the hill over the years, our flag was looking very sorry for itself so I wrote to the American Embassy in London explaining what we do and asking if they would consider giving us a replacement. After all, we are commemorating their boys who died far from home. To my intense disappointment and not a little disgust I didn’t even get an acknowledgement. I mentioned this whilst I was giving a guided tour of the museum and somehow, within a matter of days, the word had been passed to Kelly McCarthy in the States. Kelly contacted me by email and within a couple more days the North American Manx Association had arranged to give us not just any flag, but one that had been flown over the Capitol in Washington. I was amazed at how quickly Kelly made it all happen and very moved that the Association felt so strongly about it. My faith in the USA had been dented a little by the lack of interest from its London diplomatic representatives but this action by the Association showed very strongly where the hearts of that country’s people lie. I was very moved by it and I cannot thank them enough for providing us with this new flag which will fly on North Barrule on the anniversary of the crash for many years to come. When not flying it will be on display at the museum along with artefacts from the crash.”

“Whatever one’s views might be of the part that America plays in the world today, one thing cannot be denied: the patriotism of the American people and the way in which they remember their loved ones who died fighting fascism is second to none. This has been graphically shown to me personally by the number of Americans who have come to the Island to see where their loved ones died. We have had brothers, sisters, nephews, former girlfriends and best buddies and we have had the pleasure of taking them to see the crash sites. This sounds rather ghoulish but it’s not at all so. Nature has softened the scars on the ground and visiting the site helps to bring closure to these people after almost 70 years. Their reaction to our memorial on North Barrule and to our Museum’s displays on other air crashes involving Americans is firstly one of gratitude but also one of surprise that people here on the Island care and go to the trouble of commemorating their loved ones. It really is the least we can do.”

Kevin Wilson, Secretary and Past President of the 381st BG Memorial Association said “A sincere thank you to Ivor, to the people of the Isle of Man and their descendents in America for remembering the men of the 381st Bomb Group killed at North Barrule on 23 April 1945. It was a particularly hard loss for the group, losing many combat veterans and ground support personnel so close to the end of the war and during an R&R flight. Families of some of these men still regularly attend the 381st annual reunions.  We do not forget them and share your remembrance. “

The Manx Aviation and Military Museum is located at the edge of Ronaldsway airfield on the main Douglas to Castletown road and is open Saturdays, Sundays and Bank Holidays from 10am to 4.30pm. Special tours can be arranged on request. 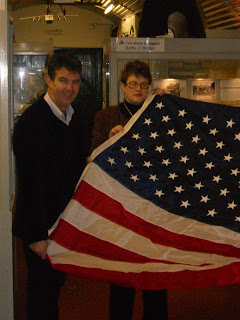 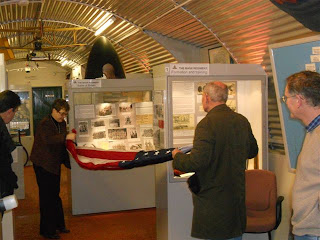 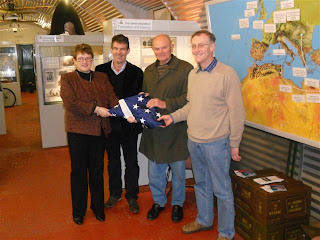