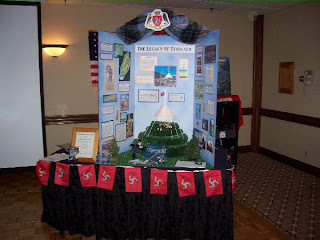 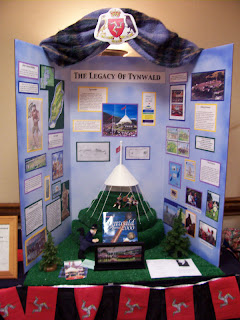 http://www.facebook.com/home.php#/group.php?gid=21453162077 is the NAMA Youth Group site on Facebook – please ask under-21s that you know to go there and talk to other Manx connected youth and also to think about the 2010 NAMA Youth Award.

The NAMA Youth Award is a piece of special Manx black limestone carved with the three legs of Man emblem. It is awarded every two years (even numbered) by the Isle of Man Department of Education to a student or group of students in the US or Canada, 18 or younger, who makes a contribution to maintaining an awareness of the Isle of Man and its culture here in North America. (NAMA gives an award in the IOM for Manx kids.)

And if the rock’s not enough, the North American Manx Association has just decided to award $200 to the 2010 winner(s) as well as free lifetime membership to NAMA.

The winner must demonstrate an interest in Manx culture or history by sharing their knowledge through essay, art, multimedia, performance art, etc.

Nominations will be accepted via the internet or by snail mail. Each nomination must be in the form of a short description of the nominee’s work that explains how this relates to the Isle of Man. Photos or video of the original work should accompany the nomination (soft or hard copies) . Nominees must provide contact details for themselves and one reference that may be used by the judges to discuss the work and its authenticity. All initial contacts should go to kelly@mustgoto.com who will pass them to the Youth Award team.

Congratulations to Becky Billman of Minnetonka, MN who won the 2008 Award with this traveling exhibition about Tynwald.