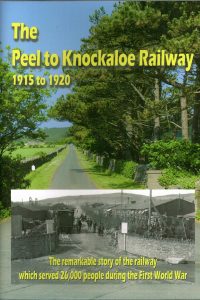 Fitting snugly into a knapsack, this new publication encapsulates the memory of a short-lived 3ft gauge railway line which served the expanding Knockaloe Internment Camp, situated on the west coast during World War I.

Acting as a spur from the main line in Peel, it became a veritable work horse for the burgeoning camp which eventually housed a population of approximately 26,000 internees and guards.

The booklet is an ideal companion with which to follow the route – although you’d be hard pressed to find any of the track which transported essential supplies. It’s believed to be the first time information about this topic has been made available under one cover, detailing some remarkable statistics, focusing upon employment opportunities and the railway line’s construction.

Published by the Manx Transport Heritage Museum, it’s available from Mitchell’s Newsagents and the Ward Library in Peel, as well as Manx National Heritage outlets priced at £5.

However, there’s an opportunity to join a fully escorted walk along the route of the defunct railway line on the 9th September, starting at 2.00pm from the overspill car park at the House of Manannan, with no need to book in advance. Alternatively, the walks will be repeated during the Heritage Open Days weekends.

Please note that some sections of the route are unsuitable for wheelchair users and those with limited mobility.

Additionally, meet in the foyer of the House of Manannan at 3.30pm on the 7th September to commemorate the closing of the Peel to Douglas railway line in 1968.