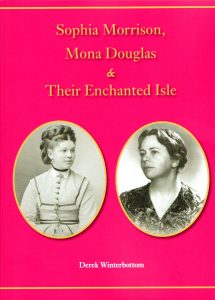 Local author, Derek Winterbottom, has written several books concerning different aspects of the Isle of Man, but he has now focused his attention towards two remarkable women who devoted their lives to an all consuming passion.

Both Sophia Morrison and Mona Douglas undoubtedly played a crucial role in the survival and continuity of the Island’s language, folklore and other traditional elements of Manx life; but here we have a book which brings them together in printed form and explores their lives on an intimate basis.

Although their backgrounds couldn’t have been more different, both women sought the same goal, in an attempt to save and nourish what they held dear to their hearts, and within these pages you’ll find out more about their tremendous accomplishments and determination. And yet in some respects their upbringing reflected each others. Notwithstanding their unbridled love of Manxness, both women experienced an unusual childhood, spent time in a rural setting and were the daughters of businessmen. As recounted in this book, neither of their lives were without colour and boldness, but both of them experienced sadness and frustration in equal measure.

Other notable characters who have played their part in Manx history make a brief appearance as important cornerstones to both women’s stories, which develop on either side of the Island.

This book offers a glimpse into their daily lives and lifts the curtain occasionally on private moments, but also teases out other elements which defined them. It shadows the growing work of both women and their determination to be successful in a somewhat patriarchal world.

Sophia Morrison was very much a facilitator, and although largely remembered for her iconic book Manx Fairy Tales, worked upon other, diverse publications which also deserve recognition.

Unfortunately ill health dogged her later years and with her early death we can only surmise what her greater achievements may have been.

A large section of the book is, however, devoted to Mona Douglas, to whom Sophia passed the baton as cultural field-worker and was, indeed, encouraged by her mentor to move amongst the people and record what remained of the Island’s folk memory, language and other unique aspects of Manx life.

There are many who still remember this veritable tour-de-force, who were themselves inspired from an early age by her cultural endeavours and have continued to uphold the legacy of both women.

Sophia Morrison and Mona Douglas pursued different avenues in their quest, but were united in their resolve to be a flag-bearer for their beloved Isle of Man.

Fortunately the baton has been picked up by many since their time, who now continue Sophia and Mona’s important work.

Priced at £12.50, Sophia Morrison, Mona Douglas and Their Enchanted Isle is available from bookshops across the Island.