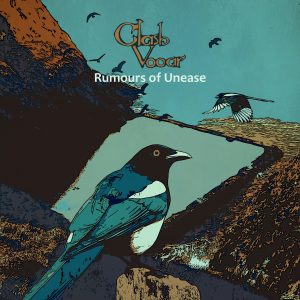 Local six-piece band Clash Vooar (Big Groove) has been breaking new ground on the Manx music scene with their extraordinary powerful mix of songs, tunes and languages, which has been described as Manx Gaelic gypsy jazz blues, with their debut album hot off the press,

Featuring jazz enthusiast Dave McLean on bass and keyboard wizard Anglin Buttimore, an unmistakable feature of the talented line-up is the distinctive sound of lead vocalist and songwriter Aalin Clague, who also introduces the mellow note of the cornet to selected tracks. She’s accompanied on vocals by another well-known composer and flute player Breesha Maddrell and ukulele performer Rob Cain (all from the Manx electro-folk band Moot) and drums exponent Danny Kneale. And there’s a guest appearance from Jack McLean (Scran) on accordion.

Members of the band have performed independently at a host of worldwide festivals, with music from Clash Vooar and Moot recently featured on the BBC Radio 4 programme Notes from a Musical Island, but in this incarnation have already notched up several successful performances at local festivals.

Presenting a selection of re-imagined, traditional music and original songs, Clash Vooar specialise in idiosyncratic storytelling which has its roots in Manx folklore, but successfully locks in prog rock keyboard, jazz inflection and evocative samples mastered by Rob Cain.

This exciting and revolutionary album unleashes a freedom of expression which has been unequivocally shaped by the band’s diversity with sound and experimentation, taking Manx music into an exciting new era.

Further information about Clash Vooar is available on their Facebook page.