New Governor for Isle of Man 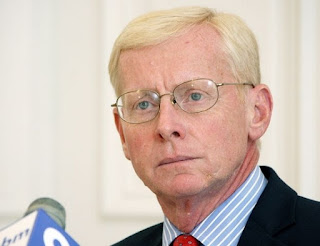 The Isle of Man will have a new governor when Adam Wood’s five-year term ends in April. His successor will be Sir Richard Gozney (seen here), a retired diplomat.
His distinguished career included being Governor and Commander-in-Chief of Bermuda from 2007 to 2012,  British High Commissioner to Nigeria from 2005 to 2007 and  British Ambassador to Indonesia from 2003 to 2005. He has also worked in Argentina, Spain and Swaziland. Since retiring, he has been non-executive director, a post from which he recently retired.
He says that he and his wife visited the Island a few years ago and, having fallen for it, they are looking forward to moving to Government House and to meeting the Island’s people.