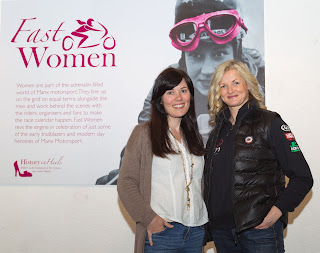 A new display at the Manx Museum in Douglas highlights some stand out female personalities associated with the world of motorsport on the Isle of Man, from the early trailblazers to the modern day heroines.
The pop up visual exhibition, part of Manx National Heritage’s ‘History in Heels’ project that celebrates women associated with the Isle of Man and their stories, not only features some of the notable competitors who have raced the Mountain Course and their personal stories, but also takes a look behind the scenes and details the contribution of some of the unsung female Manx Motorsport officials.
Beryl Swain, widely recognised as the ‘first lady’ of the TT, rocked the sport when in 1962 she entered as a rider the 50cc race at the Isle of Man TT, becoming the event’s first female solo competitor. The 26 year-old finished 22nd and declared her intention to contest the Senior TT the following year but the sport’s governing body, the FIM, withdrew her racing licence, on the grounds the sport was not suitable for women. In spite of Beryl’s protests, the decision was upheld and she hung up her leathers and did not race again.
Beryl’s modern day successors featured in the display include Jenny Tinmouth, who broke the record as the fastest female around the Mountain Course as a newcomer in 2009 and posted an average lap speed of 119.945mph the following year, a record that still stands today.  Jenny eclipsed the time of Maria Costello, the previous record holder, who will be competing in this year’s Lightweight TT Race.
Local Manx female competitors recognised in the display include Debbie Barron who has had a lifelong interest in motorsport, from accompanying her marshalling parents to the races as a child to marshalling herself and ultimately racing in 2010. Fellow local sidecar passenger Hayley Jane Capewell became the youngest female TT competitor in history in 2014 at the age of 19.
Carolynn Sells made history in 2009 when she became the first ever female to win on the mountain circuit when she came in first in the Ultra lightweight MGP. Carolyn has now retired from racing but  she continues her involvement in Manx Motorsport as a Rider Liaison officer at the MGP and as a director of the Manx Motor Cycle Clubs.
The major contribution that the Musson family have made to the TT Races is heavily featured in the display.  Hilary made history in 1978 when she became the first woman to compete in the same TT race as her husband, John.  She competed in 8 further TT meetings before moving into the Manx Grand Prix and Southern 100, where her last race was in 1993. Hilary’s daughter Gail continued the family dynasty and remains the only women to have completed a 100mph lap on a 125cc machine which she achieved in 2004. Hilary continues to be associated with the event as a marshal despite receiving serious injuries in the 2007 incident at the 26th milestone.
Behind the racing scenes, other female contributors to the world of Manx Motorsport recognised in the exhibition include TT Welfare officer Wynn Evans, who tirelessly works on behalf of injured riders and their families and Frances Thorp, the Secretary of the Friends of the TT Riders Fundraising Association, who was the recipient of the prestigious Spirit of the TT Award in 2014.
Manx women’s involvement in motorsport is not restricted to two wheels as the display also features a few petrol headed rally girls, including Evelyn Leece, co-founder of the Manx Auto Sport Club and current rising star Natasha Ellison, who has just come 2nd overall in the road rally.
However, women’s involvement in car racing on the Isle of Man can be traced back to its very origins.  A chance encounter for Dorothy Levitt with her boss Selwyn Edge, racer and director of the Napier Car Company, led to her being selected for a glamorous publicity stunt, to show that his cars were so simple to drive even a woman could do it. Levitt’s driving skills far exceed everyone’s expectations and she gained a taste for motoring, going on to win a number of races and set records in the process although Edge himself prohibited her from racing in the inaugural Tourist Trophy race on the Isle of Man in 1905 which the Napier team won.
Levitt became the leading exponent of a woman’s “right to motor” she gave many lectures to encourage women to take up motoring and in 1909 published The Woman and the Car: A Chatty Little Hand Book for Women Who Motor or Want to Motor. Her book contained many tips, including carrying a ladies hand mirror, to “occasionally hold up to see what is behind you”. Pioneering the rear view mirror seven years before it was adopted by manufacturers.
The free exhibition is open until 6 August, Monday to Saturday 10am – 5pm. The Manx Museum will also be open on Mad Sunday and will host two late night openings on Tuesday 9 June and Thursday 11 June and will be on these days from 10am until 9pm.