Anyone who knows me knows what a keen and active Girl Scout I am — but I started life as a Girl Guide, the activity that offered me leadership opportunities, travel and gave me my lifelong interest in self-reliance. So I am really happy to see these stamps from the Isle of Man Post Office celebrating Girl Guides in the Isle of Man. 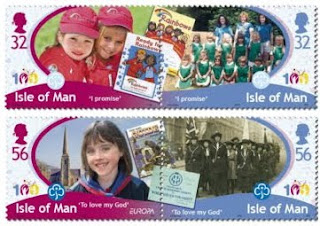 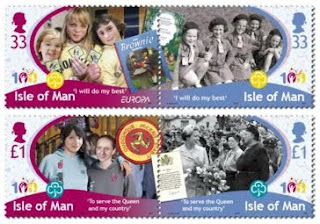 The Isle of Man Post Office is delighted to celebrate the Centenary of Guiding with this miniature sheet. The Girl Guides Association was officially formed in 1910 with Agnes Baden-Powell (Robert’s sister) as President. The first Isle of Man Guide Company 1st Douglas (St. Matthews) was officially registered on 7th February 1916, followed by the 2nd Douglas (St Georges) and 3rd Douglas on 17th October 1917.
Of the early Companies to be registered the Company with the longest continuous registration is 9th Douglas (St Ninian’s), which has run for eighty years, from January 1930 to the present day, without a break. The lives of many thousands of girls and women on the Island have been influenced by Guiding during the first one hundred years of its remarkable history. Girlguiding Isle of Man is today the largest voluntary youth organisation on the Island, with 1,300 members; girls, young women and adults.
Membership of the Trefoil Guild is open to anyone over the age of 18 who has been or still is a member of Girlguiding UK or the Scout Association.
Date of issue: 18.01.2010