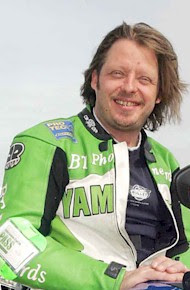 “In By Any Means”, which is on BBC2 in the British Isles, Charley Boorman is trying to travel from his childhood home in Wicklow, Ireland, to Sydney, Australia. I’m not sure if a US TV network, cable or satellite channel will pick it up but look out for it.

Charley, his close friend Russ Malkin and cameraman Mungo will attempt to travel more than 20,000 miles through 25 countries, across three continents.

They will make their journey ‘by any means’, using whatever mode of local transport they can get their hands on to drive, ride and sail to Sydney by dinghy, helicopter, train and even elephant.

In the first episode of the six-part series, Charley and Russ visit the Isle of Man, take to motorcycles and ride the famous 37¾ mile Mountain Circuit.

The footage, shot in April, sees 14-times TT winner John McGuinness, the first person to lap the course at an average speed of more than 130mph, take them on a tour of the course.

The Isle of Man is expected to feature in a 10-minute segment of the first episode. The Isle of Man TT (Tourist Trophy) Race is a motorcycle racing event held on the Isle of Man since 1907. The race is run in a time-trial format on public roads closed for racing with the first race held on Tuesday 28 May 1907 and was called the International Auto-Cycle Tourist Trophy. The event was organized by the Auto-Cycle Club over 10 laps of the St. John’s Short Course of 15 miles 1,470 yards for road-legal touring motor-cycles with exhaust silencers, saddles, pedals and mud-guards.