↓ Skip to Main Content
Home › Uncategorized › Nice while it lasts

Nice while it lasts

Kelly McCarthy Posted on May 25, 2010 Posted in Uncategorized 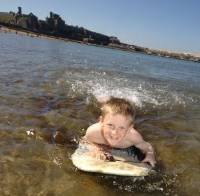 THE weekend was the hottest so far of the year, with temperatures soaring to 25C. On Saturday, the temperature reached 20.4C (69F) at the Isle of Man Met Office, based at Ronaldsway.

It was well above the average May temperature of 17C (62F).

And it smashed the hottest day reached in the Island so far this year. That was achieved on Thursday, May 6, when 16C (60F) was recorded at the airport. Many Isle of Man residents flocked to the Island’s beaches to enjoy the warm weather.

But there was bad news for those hoping that the weekend’s weather was the start of sunny summer.  On Monday morning, a Met Office spokesman said that the wind direction had already changed. It means that the temperatures forecast for the week are getting increasing cooler, from a maximum of 14C (57F) today (Tuesday) to 13C (55F) by Friday.

There is a chance of rain on Thursday and Friday.