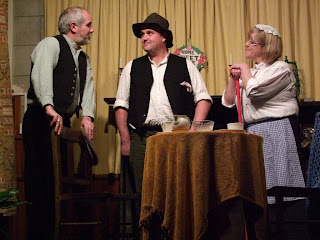 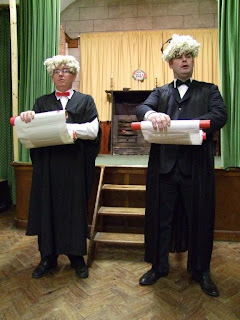 The annual concert, held in the delightfully named Ebenezer Hall* in Michael village, proved it could still draw the crowds with the venue packed to capacity at what is now a ticket only event.  Run these days by Michael Heritage Trust this is a traditional part of the Manx calendar upheld for many years by the Misses Cannell whose hymn sheets we were still using to start the evening!
This was followed by some lively music from local traditional folk band ‘The Reeling Stones’ who are a young and talented set of musicians based mostly in the west of the Island. Richard Corlett, a young man from St Johns, then delighted the audience with two dialect recitations, a long standing favourite at this event.
In fact the evening was dominated by fresh, young talent including Maxine Smalley, a member of the Manx traditional dancers ‘Ny Fennee’. Dressed in striking full costume, and with little space for manoeuvre, Maxine treated the audience to two solo dances accompanied by musicians from ‘The Reeling Stones’.  This was swiftly followed by two other members of the Corlett family; Amy read another Manx dialect poem followed by Bill who sang two well known numbers from the ‘Manx National Song Book’.
Roy Kennaugh, who compered the evening also managed to squeeze in a personal choice of poem written by centenarian Norman Barron formerly of Kirk Michael, but now resident in the Corrin Home. But the tone of the evening then changed as comedy duo Simon Clarke and James Radcliffe strode forward. Performing as ‘The Deemsters’ nothing from Manx life escaped their straight faced, but witty delivery, which was lapped up eagerly by an expectant audience.
As usual the presentation of ‘Yn Gliggyr’ was awarded to someone for their contribution to Manx culture within Kirk Michael, which this year was awarded by Mrs. Pam Naylor to the aforementioned Roy Kennaugh.  Finally came the highlight of the night with the presentation by the Michael Players of the Manx dialect play ‘Courtin’ Times’, with their own hilarious interpretation of how to romantically woo your neighbour successfully into marriage in the depths of the Manx countryside in the days of yesteryear.
This was swiftly followed by the singing of ‘Arrane Oie Vie’ and the anticipated enjoyment of a sumptuous country supper.Valerie Caine, © January 2010 Photos: “Courtin Times” and the “The Deemsters” by Valerie as well.*Ebeneezer means “Stone of Help” and is a common name for chapels of many denominations, particularly Methodists.**Oie’ll Verree means Eve of Mary and is the Old Christmas Eve — what we now know as 12th Night. As you can see the Manx are still celebrating in much the same way as we do at the Washington D.C. Manx Society! (OK, you’ve got more local talent but we’re very enthusiastic!)