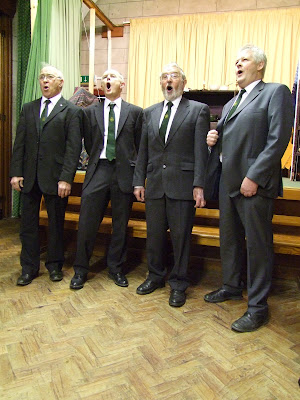 With the onset of January the annual Oie’ll Verree concert, held in the Ebenezer Hall in Kirk Michael, is a popular social gathering, with an opportunity to sample the provincial delights of rural entertainment and a Manx home-made supper.
Compere for the evening was Peter Clague, Chair of Michael Heritage Trust, who guided us skilfully through the varied list of entertainment, injecting humour and spontaneity with alacrity.
With every ticket sold and not a spare seat in the hall, this year’s concert departed from Manx tradition by starting on time, with the first half of the evening’s entertainment dedicated to a selection of entertainers drawn from various parts of the Island. Two dancers from Ramsey based Manx traditional dance group Ny Fennee kicked off proceedings, followed by local poet Pam Evans with a self-penned poem which described an alternative version of the nativity against the backdrop of a contemporary scene in a Douglas Police Station. But we were also treated to a number of songs by ‘The Farmers’ Quartet’ who included the former President of Tynwald Noel Cringle and well-known farming correspondent John Kennaugh.
The on-going entertainment was interrupted briefly by the appearance of a substantial home-made supper which included an extensive variety of cake (I can recommend the drop scones and the lemon drizzle) sandwiches and copious amounts of tea!
Before the second half commenced Peter Clague dealt efficiently with the raffle, but was soon lost for words when he became the surprise recipient of an annual trophy donated by local resident Pam Naylor, presented annually by Michael Commissioners to a parishioner who has contributed significantly to village life.
After the presentation the audience settled back for the traditional dialect play performed by the hard-working Michael Players. ‘The Charm’ was written by Christopher Shimmin and follows the fortunes of down trodden housewife Mrs Quilliam. Laden down with an endless list of domestic chores and an unsympathetic husband, Mrs Quilliam resorts to the use of a charm provided by Paaie (Peggy) the local wise woman, to change her daily life, but things don’t go quite as planned.
First staged in 1912 and performed previously at the Ebenezer Hall in 1985, playwright Christopher Shimmin produced a number of dialect plays, spent time living in the US, was elected MHK for Peel and is remembered as a strong trade unionist.
Valerie Caine, © January 2013