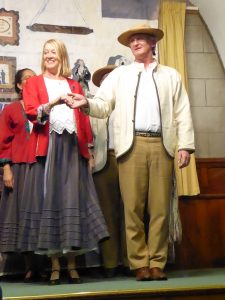 The annual Oie’ll Verree, now a concert-based form of entertainment, was once a celebration centred against a more religious backdrop, and has been the subject of much transformation over the years.

Many of the outlying districts have abandoned this special celebration, but in Kirk Michael it’s a much anticipated part of the calendar. Held in the local Ebenezer Hall, it’s a great opportunity for the audience to enjoy a host of entertainment in a provincial setting.

An introduction was made by David Corlett, Chairman of Michael Heritage Trust, (organisers of the event) followed by Mike Clague, compére for the evening – introducing a range of performers, including traditional dancers from Perree Bane and a number of singers, musicians, the current Manx Bard Zoë Cannell and a little light comedy.

During the evening, the annual Yn Gliggyr award was presented to local girl Chrissy Cannell, in recognition of her contribution towards Kirk Michael’s cultural heritage. 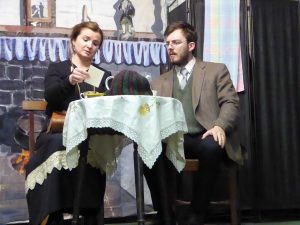 And to end the evening a little dialect poetry supplied by Deborah Taubman as an introduction to the celebrated dialect play. Presented by The Michael Players RBV, this year’s adaptation was Mr Quilliam Decides by Lillian and Eva Kneen.