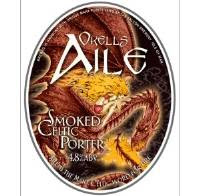 A MANX brew is the best of its kind in Europe, according to judges at this year’s World Beer Awards. Okells staff are celebrating taking the gold award for best flavored porter in Europe with Aile.

Head brewer Dr Mike Cowbourne said: ‘We are extremely proud to have won this gold medal for Aile, proving it to be the best brewed flavored porter in all of Europe, which complements the award we won for it in 2008 as one of the world’s best 50 beers. IOMToday