↓ Skip to Main Content
Home › Uncategorized › Oldest house on the Isle of Man?

Oldest house on the Isle of Man? 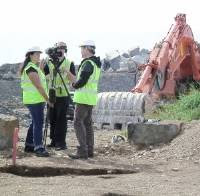 An incredible 3,000 years older than Stonehenge, it dates back to the time when the first human settlers returned to the Isle of Man after the end of the Ice Age. It’s part of the Ronaldsway find.

Describing the significance of the find, Manx National Heritage field archaeologist Andrew Johnson said: ‘It’s defining moment in an archaeologist’s career. Finding a Mesolithic house is like finding the tooth of a hen – you would never think it would happen!’

The site consists of a slight hollow 6-7 metres in diameter with a series of post holes around the outside which would be have supported a large wooden structure, possibly in the shape of a wigwam, that would have been home to an extended family.