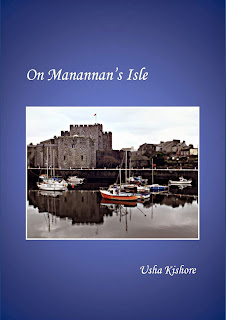 This is to publicize the forthcoming book of poetry called “On Manannan’s Isle” by Manx resident, and internationally acclaimed poet, Usha Kishore.

Born in India, Usha has a unique take on cross-cultural experiences, and the poems express both her love of the Isle of Man, her grasp of its culture and her holding on to her Indian roots. Usha is an award winning poet of considerable status, and she is currently teaching English in one of the island’s High schools.

The collection is being sponsored by the Isle of Man Arts Council and Culture Vannin and is due for release in February 2014 as part of the Island of Culture project.

The book is being published by Manx publishers dpdotcom and is priced at £5.99 or US$9.99 and is being launched on February 12th 2014.

On Manannan’s Isle
Usha Kishore’s debut collection highlights an immigrant’s perspective of the Isle of Man.   Usha’s poetry conscientiously explores many facets of the island like the landscape, the Celtic myth of Manannan and Manx culture, history and art.  The poet portrays the increasingly cosmopolitan nature of the island with the postcolonial palette of language, culture and identity.  The collection poignantly examines diasporic Indian culture and aspects of multiculturalism, juxtaposing the contrasts of integration and alienation.