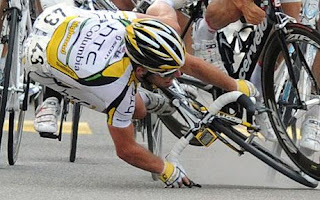 The Isle of Man rider was handed a 30 second time penalty, docked 25 points and fined 200 Swiss francs following his involvement in the spectacular crash at the end of stage four of the Tour of Switzerland on Tuesday.  Cavendish and Heinrich Haussler were going head-to-head in a sprint finish with the Manxman half a wheel ahead 30 yards from the finishing line when their wheels clipped before both crashed ahead of the chasing peloton which was sent sprawling in their wake.

Both riders appeared to drift at various stages of the sprint but Cavendish, riding on the limit and “rocking” from side to side, appeared to sway to his left momentarily before the impact. Cav Cavendish might reflect that he has escaped very lightly in terms of injury. As he crashed to ground and was run-over by Tom Boonen, the former world champion, it seemed likely his Tour de France challenge next month was over and possibly the season as well but in the end a nasty outbreak of ‘road rash’ – the torn and ripped skin caused by a crash – appears to be the only damage. The mental scars may take a while to heal though. “He has skin rash everywhere,” said team doctor Helge Ripenhof. “In the right shoulder, the right hip, the right knee, and he’s very shaken but no broken bones as far we can see.”