Over forty Isle of Man business people turned out for a seminar on the ‘seismic’ developments taking place in Africa, and the opportunities they present.

The seminar was led by Standard Bank’s Chief Economist, Goolam Ballim. In the last decade Africa has gone from the hopeless continent to a rising star, meanwhile Europe’s share of trade with Africa has halved as the newcomer on the world economic stage has been courted by China and India.

Goolam heads up a team of 53 analysts in South Africa and is a highly respected international economist. He told the packed seminar, ‘Most of Africa is growing at a rate of 5% or better which is astonishing when you consider that growth in the rest of the world is at best weak. Even fragile economies in Africa like Mozambique, are showing promise. We are seeing political maturity in many countries such as Ghana which recently saw a seamless transition when the opposition won the election. This kind of political maturity would have been very rare and hard to perceive just a short while ago.’

He explained proof of the ascendance of Africa’s economic prospects comes in the form of the developing middle class who are mutually supportive of socio-economic and political development across Africa, spurring foreign investment and creating a positive transformation.

Goolam highlighted eleven nations within Africa where the middle class is rising fast, Nigeria is leading the pack and over the next 15 years it’s estimated there will be a further seven million households classified as middle class in that country alone. Even countries which have been ravaged by war and are seen as risky, such as Angola, will see big rises. It’s estimated Angola’s middle class will rise from the 1.2 to 1.3 million it is today, and around 33% of the population, to around 45% by 2030. 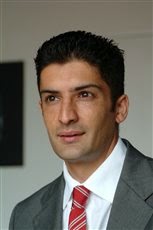 Goolam believes it’s the people in Africa who will drive the growth, ‘Another seismic dimension is Africa’s population which in 1980 was roughly 10% of humanity, but by 2050 it’s estimated that one in four humans will be African, while in contrast China’s population appears to be reducing in relative terms. The other factor is it is an exceptionally youthful population, the median age of an African is 20, the median age of a European is 40. While Europe and Asian countries such as Japan struggle with an increasingly dependent and ageing population, Africa has a growing working age population. Over the last decade roughly 40% of Africa’s growth can be explained by people being able to work and being productive in the economy.’

The seminar was hosted by Jason Gaines of Standard Bank’s Isle of Man Corporate and Business Banking team. He said:

‘We have to look to new markets if we want to grow our economy, and Africa is without doubt the rising international star. It is however also a difficult world to penetrate and each of the countries in the continent is different. Whilst the risk appetite of many counterparties has decreased, as Africa’s largest bank the continent is our specialism. Goolam emphasised how imperative it is that you understand the local market conditions, know who to talk to and how to talk to them, and that’s where we can help. We cannot ignore Africa and her potential, or we will run the risk of being left behind by the Chinese and Indians who are investing heavily in the continent.’