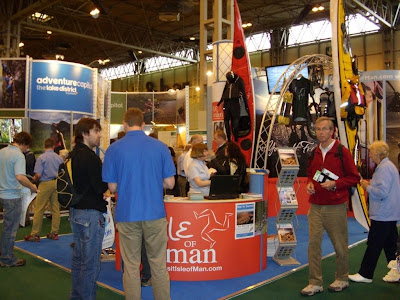 The Isle of Man stand at the Outdoors Show, held at the NEC in Birmingham, has been hailed a great success with participants reporting encouraging feedback with the prospect of many intending to visit the Isle of Man.

Some 5000 items of literature were handed out to visitors by the Department of Tourism and Leisure and the stand’s partners, representatives from the Venture Centre, Adventurous Experiences, the Mountain Biking Club, the Isle of Man Children’s Centre and Walking Festival Committee. During the Show over 1000 people took part in a prize draw to win an activity holiday for two in the Isle of Man.

Hon. Martyn Quayle, MHK, Minister for Tourism and Leisure, said:
‘The Outdoors Show is a fantastic opportunity to promote the Isle of Man and we are delighted with the response of visitors to our stand. People were pleased to see the Isle of Man exhibition and many said they would be thinking of visiting the Island this year, along with a huge number who wanted more information. The stand also attracted considerable press interest, which the Isle of Man Tourism Communications team is now following up.

‘With 100 miles of stunning coastline, a large network of cycle trails and endless beautiful walks, we are fortunate to be able cater for lovers of the great outdoors in many different capacities. I am grateful for the co-operation from all our industry partners who participated in the Show and the stand’s success is a positive sign for the year ahead, demonstrating the Isle of Man’s continuing appeal as a visitor destination. We now have to seek to convert that interest into bookings which will benefit the economy of the Isle of Man.’