Passion in the Hill ~ Easter in Peel

Kelly McCarthy Posted on April 29, 2011 Posted in Uncategorized
PEEL Castle was transformed into Jerusalem on Saturday for a re-enactment of the story of Easter. Here is a photo montage and here is more. 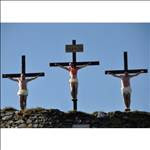 A cast of about 80 took part in Easter on the Hill.
It was watched by 900 people inside the castle and about 300 who watched events unfold from Peel Hill.
One of the organisers Fiona Anderson, said: ‘We were thrilled with how it went.
‘It stopped raining at 2pm just in time to get all the sound equipment set up.’
The story started at the Creg Malin car park at 4pm – from where Jesus (played by Alex Brown, head of the Scripture Union Ministries Trust) rode donkey (Monty) along the promenade to the castle.
About 200 people followed the procession waving palm branches and shouting ‘hosanna’.
The story continued inside the castle, with the audience joining in with the taunts and shouting ‘crucify him’.
Jesus was then crucified on one of three crosses set up on the castle’s half moon battery.
Following the re-enactment, guests enjoyed hot cross buns and hot spiced apple juice.
Easter on the Hill followed on from the success of Christmas on the Hill, which saw thousands flock to St John’s on Christmas Eve to see the nativity story.