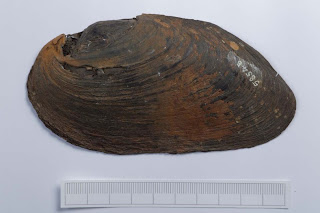 PEOPLE in the Isle of Man are being asked to share any information they have on the Manx freshwater pearl mussel.
The Department of Environment, Food and Agriculture is asking for “anecdotal” information on the mussel which is one of the longest living invertebrates, capable of living for more than 200 years.
Freshwater pearl mussels were once common in fast flowing, nutrient poor rivers throughout Europe and the North American Atlantic seaboard.
However due to a combination of pollution, habitat degradation and over harvesting for pearls they are now the most endangered freshwater bivalve molluscs in the world.
Records show that the mussels were once in existence in the Island in the River Dhoo.
Writing in the Naturalist in 1865, about a previous visit to the Isle of Man, John Dixon stated: “I met an old gentleman who…procured me some fine living specimens…This was Mr Oates, of Kirk Braddan, through whose farm the Dhoo runs.”
Much more at http://www.isleofman.com/News/article.aspx?article=42644