The annual Inter-Celtic festival, Yn Chruinnaght, brought colour and vibrancy to Peel during five days of music, song and dance, as visiting groups and artistes joined with local performers to provide entertainment at various venues throughout the town. 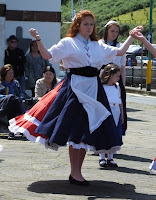 It was a great location for a varied programme, which was largely focused around the hub of the fishing port, kicking off with a concert in St German’s Cathedral before heading down to a popular gig at The Creek.
Peel Methodist Church has also become a favourite acoustic setting for afternoon concerts, which this year featured a selection of singers and musicians, including a number of rising stars from the ranks of the Island’s younger performers.

Out at Peel Golf Club, the award-winning Mischa Macpherson hosted a Scottish singing workshop, which was followed later by a rousing ceili, with music provided by visiting Breton and Cornish groups and the inimitable Calor Gas Ceili Band in their final performance, after thirty six years on the Manx circuit.

Meanwhile a discussion about Celtic languages took place at the Methodist Guild Room, a Cornish dance workshop at the Centenary Centre  and the Corrin Hall provided a venue for a popular craft fair, which included a range of artistic talent and a varied use of local items.
And for those wishing to try something a little different, specialist carver Sharon Littley was on hand during two workshops over the weekend to help talented individuals carve their own Welsh lovespoons.

Music sessions, one of the mainstays of the festival, took place at The Royal and at The Highwayman.

But probably the most successful events were at the Centenary Centre, with two sell-out concerts featuring the phenomenal folk band Flook with support from Greg Joughin and local duo Strengyn, followed by the magnificent premiere of The Gathering, written by David Kilgallon and commissioned by Yn Chruinnaght; with a powerful finale by Breton duo Landat-Moisson.
Other events involving Island musicians and dancers were held at The Institute in Laxey and at the Villa Marina in Douglas.
The festival concluded with an energetic display of Manx dancing by local groups and a musical interlude from some of our up and coming musicians from the Bree Supergroup outside the House of Manannan in glorious sunshine.
Valerie Caine