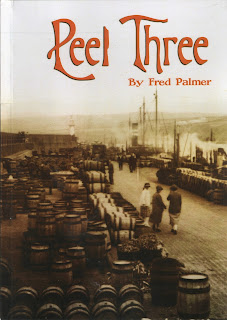 Keen local amateur historian Fred Palmer was a well known character in the town of Peel, remembered for his popular publishing business and his long term involvement with the ‘Peel City Guardian’.

Over many years Palmer collected numerous stories and anecdotes about Peel and its people, which he subsequently published in a selection of volumes during his lifetime. But upon his death Palmer left a wealth of untouched material, some of which has now been transcribed and edited by the curator of the ‘Leece Museum’ Roy Baker and published under the title ‘Peel Three’.

Compact, but informative, this latest volume covers just a small area of the town, exploring yesteryear and evoking rich memories of a bygone age, with the promise of more to come in subsequent volumes.

Published in conjunction with the Manx Heritage Foundation and with the blessing of Palmer’s sister Emilie Pugh, the book is priced at £5.00, with proceeds invested in refurbishment of the ‘Leece Museum’. ‘Peel Three’ is available from various outlets in Peel including the ‘Leece Museum’ situated on the East Quay.