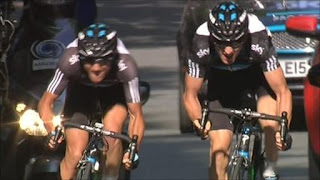 Peter Kennaugh won a bronze medal at the UCI Track World Championships at Apeldoorn in Holland on Wednesday evening as part of the GB team pursuit squad.

Part of a young British squad, hampered by the illness of Ed Clancy that forced him to sit up three laps from the end of their qualifying ride, they qualified only third fastest and faced Commonwealth Games silver medallists New Zealand in the ride-off for bronze.
The team of Clancy, Kennaugh, Steven Burke and Andrew Tennant rode 4min 02.764sec, more than two seconds slower than pre-event favourites Australia who qualified fastest in 4m 00.168s.
Russia qualified second quickest but were crushed by the Aussies in the final – the latter team winning by almost five seconds in 3m 57.832s.
For the bronze medal showdown with the Kiwis, Britain drafted in Welsh teenager Sam Harrison to replace Clancy. The GB quartet finished together in an almost identical time to the qualifying round, beating the New Zealand team with some ease.
The Apeldoorn track was said to be more than three seconds slower than Manchester and the other quicker tracks in the world, but the improved performance of the Australians in the past year is another wake-up call to the Brits in the build-up to the London Olympics.
Olympic Academy rider and fellow Manx Sport Aid recipient Mark Christian was third quickest in the Tour of Normandy prologue around the town of Mondeville on Monday afternoon. IOM Today
In his first race of the year, Christian was two seconds slower than Swede Tobias Ludvigsson, who was in turn half-a-second quicker than Mark’s GB team-mate Luke Rowe over the 4.8km course.
Fastest to the intermediate checkpoint, Christian wore the king of the mountains jersey in the first road stage between Colombelles and Forges-les-Eaux on Tuesday, finishing near the front of the bunch in a strong 18th place, 11 seconds behind winner Thomas Vedel Kvist of Denmark.
The young Manxman was 51st in Wednesday’s third stage between Forges Les Eaux and Grand Couronne, within the second group of 50 riders, and was 40th on general classification going into Thursday’s short 72km hop to Elbeuf Sur Seine.
The seven-day Tour of Normandy has a reputation for tough racing and is seen as a stepping stone for future stars.