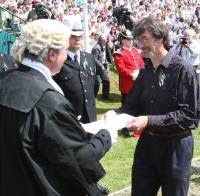 The newly-appointed Clerk to Tynwald, Roger Phillips, receives a petition of grievance at Tynwald yesterday. This is an ancient right and nine people availed themselves of it.

Following a service in the Royal Chapel, which was broadcast live on a big screen, the procession of Tynwald members, captains of the parishes, members of the judiciary and dignitaries made their way to Tynwald Hill.

The 17 new acts passed during the last 18 months by Tynwald were promulgated in English and Manx.

After the captioning of the acts, Castletown resident Ian Qualtrough received the Tynwald Honour for his contribution to Manx life. He is a Friend of the Gaiety Theatre, a mainstay of Castletown Methodist Church, a lifetime chorister, a member of the Lhon Dhoo Male Voice Choir, a former member of the Meadowside Choral Society and former President of the Isle of Man Beekeepers’ Federation.

Umbrellas were put up during the ceremony, but unlike last year when visitors tried in vain to stay dry, this year they hoped it would offer a bit of shade.

The Tynwald fair was bigger than ever with visitors enjoying a wide range of stalls and entertainment. For many, the sight of giant bubbles (they were bigger than a football) flying above the stands was one of the highlights. Three dance groups came together for a Grand Manx Dance event and a MusicFest, with more than 20 acts, celebrated the Island’s musical talent.

There was also a Manx Food Fayre and special events to celebrate the Tynwald National Park and Arboretum’s 30th anniversary this year. Other events included a Vikings of Mann re-enactment, dog agility trials and a fly past by the RAF.