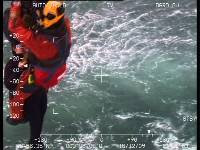 THIS was the dramatic moment when an heroic Isle of Man pilot was winched to safety after she was forced to ditch her light aircraft in the Irish Sea. Here.

Kate Pirie, 48, is lucky to be alive after her aircraft hit the water at 100mph. The RAF rescue crew who winched her to safety were astonished to find her smiling and worried only about breaking a nail.

Air traffic control at Ronaldsway received a mayday alert from the pilot just after midday on Wednesday, saying the aircraft was experiencing engine trouble as it headed to the Isle of Man. The Manx-registered twin-engine Piper Comanche, which had taken off from Guernsey with just Ms Pirie on board, had tried diverting to Blackpool Airport.

But the pilot was subsequently forced to ditch her plane in the sea 22 miles off the Fylde coast close to the Morecambe Bay gas field.  Ms Pirie climbed out of the cockpit and on to the wing of the aircraft where she was rescued by a fast response craft from the Vos Pathfinder, a stand-by vessel for the gas field whose crew had seen the aircraft ditch. The pilot was then winched from the Vos Pathfinder by a Sea King helicopter from RAF Valley which flew her to Blackpool Victoria Hospital for a check-up.