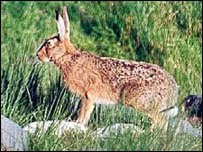 The mountain hare is only found in the northern hills and not in the south of the island, the central valley forming an apparently effective barrier.  It is a separate species to the more common brown hare which can be found in all parts of the island on lower land. Having said that, even the brown hare is relatively rare these days having declined dramatically throughout the British Isles since the 1960s, with an estimated drop from 12 million to just one million animals.
The mountain hare or Lepus Timidus can be found in northern upland areas among the heather and into the snow line. It is slightly smaller and rounder in appearance than the brown hare, has smaller ears which are held upright and an all-white tail.  It is this latter detail which distinguishes it from its cousin, as in the brown hare the tail has a black upper surface. Its other most notable feature is the change in the colour of its coat which turns white in the winter.
This is triggered by temperature, with the animal moulting to its winter coat in October/November and moulting back to its summer coat around March. It must be debated just how effective this camouflage is though, as these days even the hills of the island rarely stay white for more than a week or two of the winter.
Protection

Mountain hares on the Isle of Man are to be given greater protection against illegal coursing. Agriculture Minister Phil Gawne plans to reclassify the animals, sometimes called blue hares, as game.
Concerns were recently expressed in the House of Keys about hunting with dogs on the government’s hill estate. The hares are found in the uplands of the island north of the central valley. They moult in November and December, after which their fur turns white. Blue Hares were introduced to the island from Scotland sometime during the middle of the last century. They were originally classed as a game species but were added to the vermin list following a population explosion which impacted on livestock grazing and young plantations. The Department of Agriculture, Fisheries and Forestry, said it was concerned about “significant and noticeable decline in the local population” of blue hares “which has been exacerbated by illegal hunting activities”.

Minister for the Department, Phil Gawne MHK said: “It is difficult to police our extensive upland estate and we would urge the public to help and to report any suspected illegal activity to the police or ourselves. “Anyone caught by, or reported to, the department or the police for hunting hares will be investigated and prosecuted under the Forestry Act 1984 or under the Wildlife Act 1990.”